The modifier stack has been upgraded to remove the "original data" constraint, where some modifiers required the base object's original data and thus could not be placed in the stack after any non-deforming modifiers.

The main features of the upgrade are:

Added a VGroup input to the Armature modifier. This allows the user to specify a vertex group which will modulate the influence of all bones in the armature.

Patch #5181: Option to use an object to determine the startX&Y in the Wave Modifier

This patch allows the option to use an object to determine the wave modifier's start X & Y, it also allows for animated objects giving a moving wave start X & Y.

Thanks to Michael Fox for the patch!

New displacement direction for Displace modifier: "RGB -> XYZ". This means that vertices will be individually displaced in the X, Y and Z directions by the RGB components of the texture (R affects X, G affects Y, B affects Z). This can be used along with e.g. the colour Clouds texture for a jitter effect.

Changed the UI of the EdgeSplit modifier, based on broken's feedback from long ago:

Upgrades to the UVProject modifier:

Media:Tracktest.blend - This test file demonstrates how to use curve and array modifier to produce a simple track animation.

Media:Manual-Modifier-Array-Tentacle01.blend - A tentacle created with an Array modifier followed by a Curve modifier. The segment in the foreground is the base mesh for the tentacle; the tentacle is capped by two specially modelled objects deformed by the same Curve object as the main part of the tentacle:

Media:Footprinttest.blend - This test file demonstrates how to use Displace modifier, empties and a blend texture to produce a simple "invisible man walks on beach" animation.

Media:Manual-Modifier-Displace-Slime01.blend - A slime animation created with the Displace modifier.

Media:Manual-Modifier-EdgeSplit-Example01.blend - EdgeSplit modifier output with From Marked As Sharp selected:

Media:Manual-Modifier-UVProject-House01.blend - A house textured with the UVProject modifier. The cameras scattered around the scene are the projection objects. UVProject greatly simplifies this kind of texturing, by making it easy to line up textures with the model (bricks with windowframes for eg.) This is done interactively, open the blend and move the cameras around, you can also rotate and scale them. 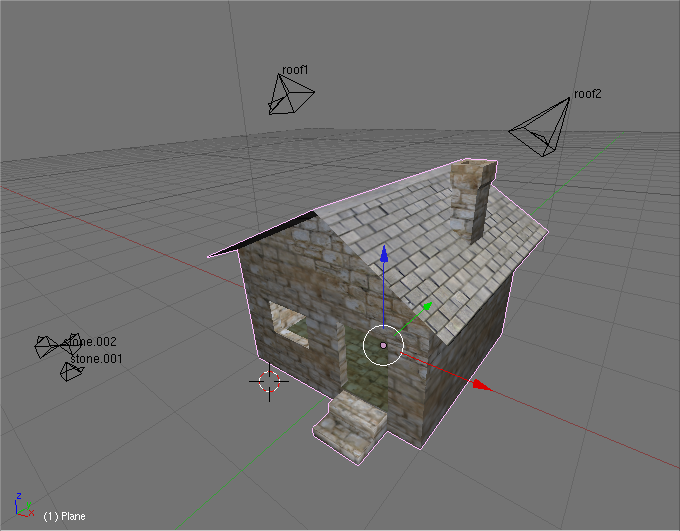