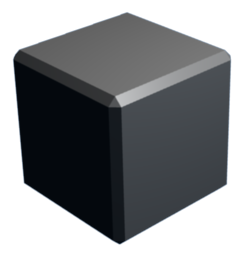 The Bevel modifier adds the ability to bevel the edges of the mesh it is applied to, allowing control of how and where the bevel is applied to the mesh.

The Bevel modifier is a non-destructive alternative to the Bevel Operation in mesh editing mode.

Although the two pictures show 2D squares, the Blender Bevel modifier can work on both 2D and 3D meshes of almost any shape, not just squares and cubes… 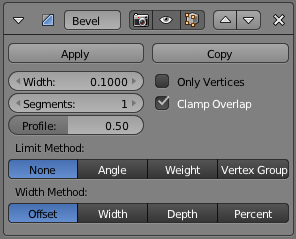 The Width numeric field controls the width/amount of the bevel applied to the base mesh. It can range from 0.0 (no bevel applied) to 1.0 (Blender Units). This value is in fact the “backing up” of the two new edges relatively to the original (beveled) one, along the two concerned faces.

Set the number of bevel segments for round edges/verts.

The Only Vertices button alters the way in which a bevel is applied to the mesh. When it is active, only the areas near vertices are beveled; the edges are left unbeveled.

This section of the Bevel modifier is used to control where and when a bevel is applied to the underlying mesh. The first row of three buttons (mutually exclusive) controls the algorithm used, and might add some extra options.

None
This button will apply the Bevel modifier to the whole underlying mesh, without any way to prevent the bevel on some edges/vertices. 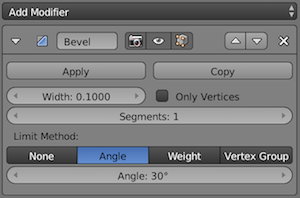 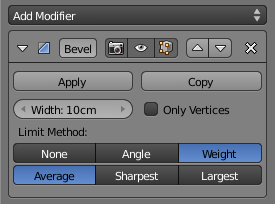 Weight
Use bevel weights to determine how much bevel is applied; apply them separately in vert/edge select mode. See Here about adjusting bevel weights. The three options specify what edge weight to use for weighting a vertex.
Average

Uses the average bevel weight at the vertex

Uses the smallest bevel weight at the vertex

Uses the largest bevel weight at the vertex

Use a vertex group to determine which parts of the mesh get beveled.