Modifiers are automatic operations that affect an object in a non-destructive way. With modifiers, you can perform many effects automatically that would be otherwise tedious to do manually (such as subdivision surfaces) and without affecting the base topology of your object.

Modifiers work by changing how an object is displayed and rendered, but not the actual object geometry.

You can add several modifiers to a single object to form a Modifier Stack and you can Apply a modifier if you wish to make its changes permanent. 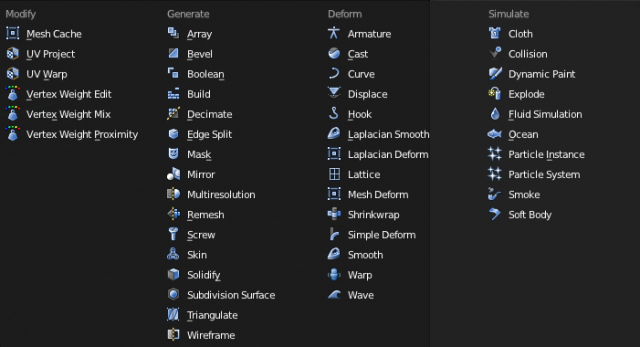 There are four types of modifiers: Modify, Generate, Deform and Simulate.

The Modify group of modifiers are tools a bit similar to Transform ones, but which do not directly affect the shape of the object, rather some other data like vertex groups…

The Generate group of modifiers are constructive tools that either changes the general appearance of or automatically adds new geometry to an object.