Once you have created keyframes for something, you can edit their corresponding curves. In Blender 2.5, IPO Curves have been replaced by F-Curves, however, editing these curves is essentially still the same.

The concept of Interpolation

When something is "animated," it changes over time. In Blender, animating an object means changing one of its properties, such as its X location, or the Red channel value of its material diffuse color, and so on, during a certain amount of time.

As mentioned, Blender's fundamental unit of time is the "frame", which usually lasts just a fraction of a second, depending on the frame rate of the scene.

As animation is composed of incremental changes spanning multiple frames, usually these properties ARE NOT manually modified frame by frame, because:

This is why nearly all direct animation is done using interpolation.

The idea is simple: you define a few Key Frames, which are multiple frames apart. Between these keyframes, the properties' values are computed (interpolated) by Blender and filled in. Thus, the animators' workload is significantly reduced. 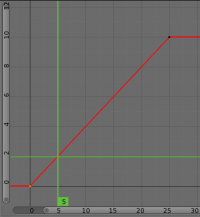 For example, if you have:


The same goes for all intermediate frames: with just two points, you get a smooth growth from 0 to 10 along the 25 frames. Obviously, if you’d like the frame 15 to have a value of 9, you’d have to add another control point (or keyframe)…

F-curves have three additional properties, which control the interpolation between points, extension behavior, and the type of handles.

You have three choices (T, or Key » Interpolation Mode):

Constant
There is no interpolation at all. The curve holds the value of its last keyframe, giving a discrete (stairway) “curve”. Usually only used during the initial "blocking" stage in pose-to-pose animation workflows.

Linear
This simple interpolation creates a straight segment between each neighbor keyframes, giving a broken line. It can be useful when using only two keyframes and the Extrapolation extend mode, to easily get an infinite straight line (i.e. a linear curve).

Bezier
The more powerful and useful interpolation, and the default one. It gives nicely smoothed curves, i.e. smooth animations!

Remember that some Fcurves can only take discrete values, in which case they are always shown as if constant interpolated, whatever option you chose. 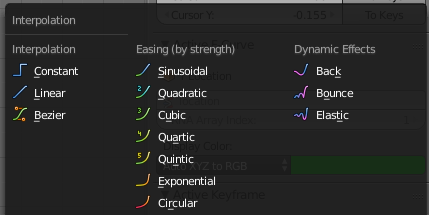 Easing (by strenght)
The different methods of easing intrpolations for F-Curve segment.

Dynamic Effects
Some dynamic interpolations between two keyframes on F-Curve.

Extrapolation defines the behavior of a curve before the first and after the last keyframes.

There are two basic extrapolation modes:

Constant
The default one, curves before their first keyframe and after their last one have a constant value (the one of these first and last keyframes). 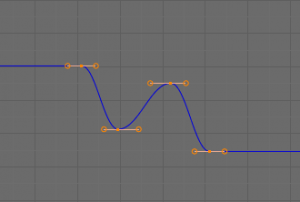 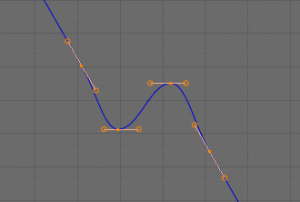 Additional extrapolation tools (e.g. the "Cycles" F-Modifier) are located in the F-Curve Modifiers

There is another curve option quite useful for Bézier-interpolated curves. You can set the type of handle to use for the curve points V

Vector
Creates linear interpolation between keyframes. The linear segments remain if keyframe centers are moved. If handles are moved, the handle becomes Free.

Although F-curves are very similar to Bézier curves, there are some important differences.

For obvious reasons, a property represented by a Curve cannot have more than one value at a given time, hence: