One benefit is that when you are working with Clamp To, it is easier to see what your owner will be doing; since you are working in the 3D view, it will just be a lot more precise than sliding keys around on a time Ipo and playing the animation over and over.

A downside is that unlike in the Follow Path constraint, Clamp To doesn’t have any option to track your owner’s rotation (pitch, roll, yaw) to the banking of the targeted curve, but you don’t always need rotation on, so in cases like this it’s usually a lot handier to fire up a Clamp To, and get the bits of rotation you do need some other way.

The mapping from the object's original position to its position on the curve is not perfect, but uses the following simplified algorithm (note, I am not the original code author so this may not be 100% accurate):

This algorithm does not produce exactly the desired result because curve time does not map exactly to the main axis position. For example an object directly in the centre of a curve will be clamped to a curve time of 0.5 regardless of the shape of the curve, because it is halfway along the curve's bounding box. However the 0.5 curve time position can actually be anywhere within the bounding box! 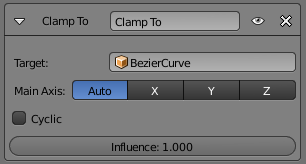 Main Axis
This button group controls which global axis (X, Y or Z) is the main direction of the path. When clamping the object to the target curve, it will not be moved significantly on this axis. It may move a small amount on that axis because of the inexact way this constraint functions.
For example if you are animating a rocket launch, it will be the Z axis because the main direction of the launch path is up. The default Auto option chooses the axis which the curve is longest in (or X if they are equal). This is usually the best option.

Cyclic
By default, once the object has reached one end of its target curve, it will be constrained there. When the Cyclic option is enabled, as soon as it reaches one end of the curve, it is instantaneously moved to its other end.
This is of course primarily designed for closed curves (circles & co), as this allows your owner to go around it over and over.