Modifiers are automatic operations that affect an object in a non-destructive way. With modifiers, you can perform many effects automatically that would otherwise be tedious to do manually (such as subdivision surfaces) and without affecting the base topology of your object. Modifiers work by changing how an object is displayed and rendered, but not the actual object geometry. You can add several modifiers to a single object to form a Modifier Stack and you can Apply a modifier if you wish to make its changes permanent. 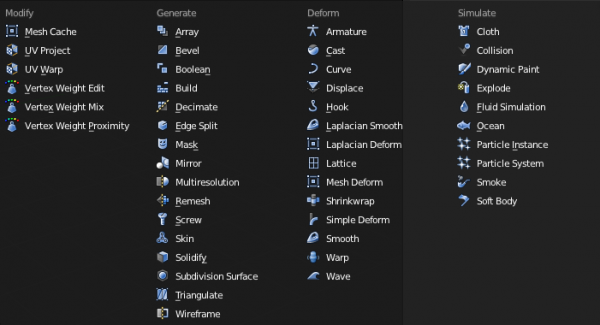 There are four types of modifiers:

The Modify group of modifiers are tools a bit similar to the Deform Modifiers (see below), but which do not directly affect the shape of the object; rather they affect some other data, like vertex groups…

The Generate group of modifiers are constructive tools that either change the general appearance of or automatically add new geometry to an object.

Array
Create an array out of your basic mesh and similar (repeating) shapes.
Bevel
Create a bevel on a selected mesh object.
Boolean
Combine/subtract/intersect your mesh with another one.
Build
Assemble your mesh step by step when animating.
Decimate
Reduce the polygon count of your mesh.
Edge Split
Add sharp edges to your mesh.
Mask
Allows you to hide some parts of your mesh.
Mirror
Mirror an object about one of its own axes, so that the resultant mesh is symmetrical.
Multiresolution
Sculpt your mesh at several levels of resolution.
Remesh
Can fix heavily triangulated meshes, and other issues, with careful Threshold adjustments.
Screw
Generate geometry in a helix-pattern from a simple profile. Similar to the Screw tool in the mesh editing context.
Skin
Automatically generate topology.
Solidify
Give depth to mesh faces.
Subdivision Surface
Subdivides your mesh using Catmull-Clark or Simple algorithms.
Triangulate
Converts all faces to Triangles.
Wireframe
Converts all faces into a wireframe (included in trunk atm).