The Armature modifier is used for building skeletal systems for animating the poses of characters and anything else which needs to be posed. With the Vertex Group and Multi Modifier options, you can use several armatures to animate a single (mesh) object.

By adding an armature system to an object, that object can be deformed accurately so that geometry doesn’t have to be animated by hand. The Armature modifier allows objects to be deformed by bones simply by specifying the name of the armature object, without having to use the (old) “parent/child” system.

For more details on armatures usage, see this chapter. 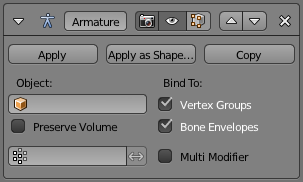 Object
The name of the armature object used by this modifier.

Preserve Volume
Use quaternions for preserving volume of object during deformation. It can be better in many situations.
Vertex Group
The name of a vertex group of the object, the weights of which will be used to determine the influence of this Armature modifier’s result when mixing it with the results from other Armature ones. Only meaningful when having at least two of these modifiers on the same object, with Multi Modifier activated.
Multi Modifier
Use the same data as a previous (Armature?) modifier as input. This allows you to use several armatures to deform the same object, all based on the “non-deformed” data (i.e. this avoid having the second Armature modifier deform the result of the first one…). The results of the Armature modifiers are then mixed together, using the weights of the VGroup vertex groups as “mixing guides”.

Bind To
Method to bind the armature to the mesh.