The Wave modifier adds an ocean-like motion to the Z coordinate of the object’s vertices/control points. This modifier is available for meshes, lattices, curves, surfaces and texts, with a few restrictions for non-mesh objects: 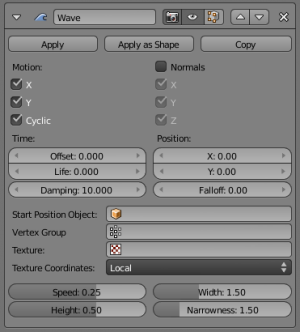 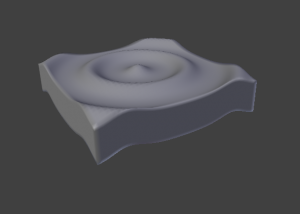 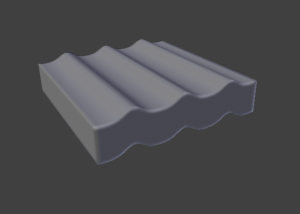 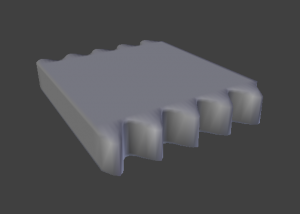 Motion
X, Y, Cyclic: The wave effect deforms vertices/control points in the Z direction, originating from the given starting point and propagating along the object with circular wave fronts (both X and Y activated), or with rectilinear wave fronts, then parallel to the axis corresponding to the X or Y button activated. Cyclic repeats the waves cyclically, rather than a single pulse.

Normals
For meshes only. Displaces the mesh along the surface normals (instead of the object’s Z-axis).

Offset
Time offset in frames. The frame at which the wave begins (if Speed is positive), or ends (if Speed is negative). Use a negative frame number to prime and pre-start the waves.
Life
Duration of animation in frames. Set to zero, loops the animation forever.
Damping
An additional number of frames in which the wave slowly damps from the Height value to zero after Life is reached. The dampening occurs for all the ripples and begins in the first frame after the Life is over. Ripples disappear over Damping frames.

Position
X and Y coordinates of the center of the waves, in the object’s local coordinates. Falloff controls how fast the waves fade out as they travel away from the coordinates above. Note that selecting a Start Position Object effectively cancels the coordinates chosen above, but retains the Falloff value.

Start Position Object
Use another object as the reference for the starting position of the wave. Leave blank to disable. Note that you then can animate this object’s position, to change the wave's origin across time.

Vertex Group
For meshes only. A vertex group name, used to control the parts of the mesh affected by the wave effect, and to what extent (using vertex weights).

Texture
Use this texture to control the object’s displacement level. Animated textures can give very interesting results here.

Texture Coordinates
This menu lets you choose the texture’s coordinates for displacement:

Local
Object's local coordinates.
Global
Global coordinates.
Object
Adds an additional field just below, to type in the name of the object from which to get the texture coordinates.
UV
Adds an extra UV Layer drop-down list, to select the UV layer to be used. Warning: do not activate this option with non-mesh objects; it seems to make Blender crash.

Speed
The speed, in BU (for “Blender Units”) per frame, of the ripple.

Height
The height or amplitude, in BU, of the ripple.

Width
Half of the width, in BU, between the tops of two subsequent ripples (if Cycl is enabled). This has an indirect effect on the ripple amplitude – if the pulses are too near to each other, the wave may not reach the 0 Z-position, so in this case Blender actually lowers the whole wave so that the minimum is zero and, consequently, the maximum is lower than the expected amplitude. See technical details below.

The relationship of the above values is described here:

To obtain a nice wave effect similar to sea waves and close to a sinusoidal wave, make the distance between following ripples and the ripple width equal; that is, the Narrowness value must be equal to 2/Width. E.g. for Width=1, set Narrow to 2.