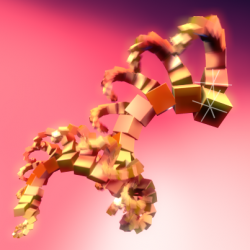 The Array modifier creates an array of copies of the base object, with each copy being offset from the previous one in a number of possible ways. Vertices in adjacent copies can be merged based on a merge distance, allowing smooth subsurf frameworks to be generated.

This modifier can be useful when combined with tilable meshes for quickly developing large scenes. It is also useful for creating complex repetitive shapes.

Multiple array modifiers may be active for an object at the same time, e.g. to create complex 3 dimensional constructs. 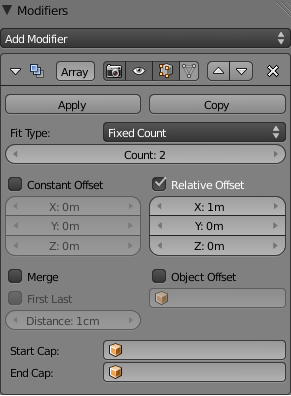 Fit Type menu
Controls how the length of the array is determined. There are three choices, activating respectively the display of the Curve, Length or Count setting:

Curve
The Curve object to use for Fit Curve.

Length
The length to use for Fit Length.

Count
The number of duplicates to use for Fixed Count.

Object offset example.
Adds a transformation taken from an object (relative to the current object) to the offset. See Object offset example. It is good practice to use an Empty object centered or near to the initial object. E.g. by rotating this Empty a circle or helix of objects can be created.

Merge
If enabled, vertices in each copy will be merged with vertices in the next copy that are within the given Distance.

Start cap
The mesh object to be used as a start cap. A single copy of this object will be placed at the “beginning” of the array – in fact, as if it was in position -1, i.e. one “array step” before the first “regular” array copy. Of course, if Merge is activated, and the Start cap is near enough to the first copy, they will be merged.

End cap
The mesh object to be used as an end cap. A single copy of this object will be placed at the “end” of the array – in fact, as if it was in position n+1, i.e. one “array step” after the last “regular” array copy. And as Start cap, it can be merged with the last copy…

The transformation applied from one copy to the next is calculated as the sum of the three different components (Relative, Constant and Object), all of which can be enabled/disabled independently of the others. This allows, for example, a relative offset of (1, 0, 0) and a constant offset of (0.1, 0, 0), giving an array of objects neatly spaced along the X axis with a constant 0.1BU (Blender Units) between them, whatever the original object’s size.

The 'Double Helix' tutorial explains the Array modifier. It is for an old Blender Version (2.44) but except for the keyboard shortcuts it is still valid.