The Mesh Cache modifier is used so animated mesh data can be applied to a mesh and played back, deforming the mesh.

This works in a similar way to shape-keys but is aimed at playing back external files and is often used for interchange between applications.

When using this modifier, the vertex locations are overwritten. 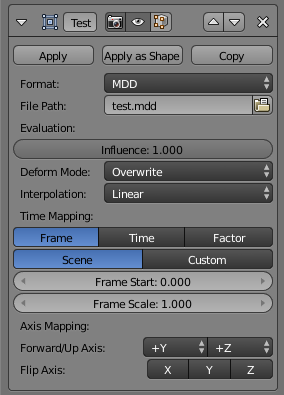 Influence
Factor to adjust the influence of the modifiers deformation, useful for blending in/out from the cache data.
Deform Mode
This setting defaults to 'Overwrite' which will replace the vertex locations with those in the cache file.
However you may want to use shape-keys, for example, and mix them with the mesh-cache. In this case you can select the 'Deform' option which integrates deformations with the mesh-cache result.
Note - this feature is limited to making smaller, isolated edits and won't work for re-posing limbs, for example.
Interpolation
None or Linear which will blend between frames; use linear when the frames in the cache file don't match up exactly with the frames in the blend file.

Axis transformation for the input coordinates.

Forward/Up Axis
The axis for forward and up used in the source file.
Often different applications have different axis defaults for up/down front/back, so it's common to have to switch these on import.
Flip Axis
In rare cases you may also need to flip the coordinates on an axis.