The Explode Modifier is used to alter the mesh geometry (by moving/rotating its faces) in a way that (roughly) tracks underlying emitted particles that makes it look as if the mesh is being exploded (broken apart and pushed outward).

For the Explode Modifier to have a visible effect on the underlying mesh it has to be applied to a mesh which has a particle system on it, in other words it has to be a mesh which outputs particles. This is because the particle system on the mesh is what controls how a mesh will be exploded, and therefore without the particle system the mesh wont appear to alter. Also both the number of emitted particles and number of faces determine how granular the Explode Modifier will be. With default settings the more faces and particles the more detailed the mesh exploding will be, because there are more faces and particles to affect detachment/movement of faces.

Here is a link to an Ogg Theora Movie showing a cube with a particle system and Explode Modifier applied:

Here is a link to the original Blender file which has an Exploding cube setup, just free the particle cache by pressing the Free Bake button in the bake panel and then press the Animate button to see the animation: 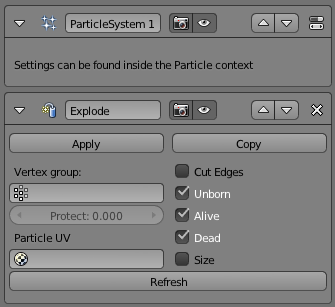 Explode Modifier panel with Particle System Modifier above it