A modifier is defined as the application of a “process” or “algorithm” upon objects. They can be applied interactively and non-destructively in just about any order the users chooses. This kind of functionality is often referred to as a “modifier stack” and is found in several other 3D applications.

Modifiers are added from the Modifiers menu. Some tools and scripts, for example Decimate and Solidify, have been migrated from its previous location and changed into a modifier. In a modifier stack the order in which modifiers are applied has an effect on the result. Fortunately modifiers can be rearranged easily by clicking the convenient up and down arrow icons. For example, (Stack ordering) shows SubSurf and Mirror modifiers that have switched places.

You can see that the results look different from the previous. This means that the stack order is very important in defining the end results. 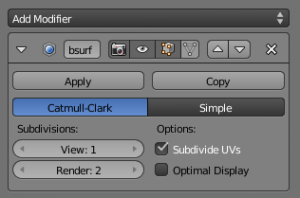 Panel Layout (Subsurf as an example)

Each modifier has been brought in from a different part of Blender, so each has its own unique settings and special considerations. However, each modifier’s interface has the same basic components, see (Panel Layout (Subsurf as an example)).

At the top is the panel header. The icons each represent different settings for the modifier (left to right):

Below the header are two buttons:

And below these buttons is a sub panel with settings for individual modifiers.

In this example a simple subdivided cube has been transformed into a rather complex object using a stack of modifiers. (.blend)

To add a modifier you add it to the stack. Once added (always at the bottom of the stack), they can be rearranged to your liking.

Some modifiers can only be applied to certain object types. This is indicated by the panel filtering the Add Modifier button on the Modifiers panel. Only modifiers that can be applied are shown in this listbox button. Mesh objects can have all available modifiers added, while, for example, Lattice objects type objects can only have a few.