The Spline IK constraint aligns a chain of bones along a curve. By leveraging the ease and flexibility of achieving aesthetically pleasing shapes offered by curves and the predictability and well-integrated control offered by bones, Spline IK is an invaluable tool in the riggers' toolbox. It is particularly well suited for rigging flexible body parts such as tails, tentacles, and spines, as well as inorganic items such as ropes.

To set up Spline IK, it is necessary to have a chain of connected bones and a curve to constrain these bones to. 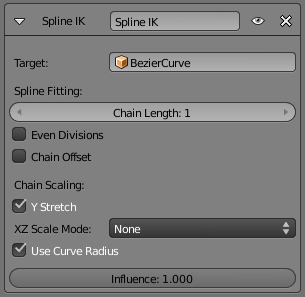 This subject is seen in depth in the Rigging/Posing section.