The corner of a cube mirrored across three axes to form ... well ... a cube.

The Mirror modifier automatically mirrors a mesh along its local X, Y and/or Z axes, which pass through the object’s center (the mirror plane is then defined by the two other axes). It can also use another object as mirror center, then use that object’s local axes instead of its own. It can weld vertices together on the mirror plane within a specified tolerance distance. Vertices from the original object can be prevented from moving across or through the mirror plane. And last but not least, it can also mirror vertex groups and UV coordinates. 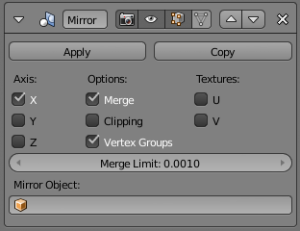 Axis
The axis (X, Y, or Z) along which to mirror (i.e. the axis perpendicular to the mirror plane of symmetry). To understand how the axis applies to the mirror direction, if you were to mirror on the X axis, the X plus values of the original mesh would become X minus values on the mirrored instance.
You can select more than one of these axes – you’ll then get more mirror instances, so that all planes of symmetry selected are “fully processed” (i.e. with one axis you get a single mirror, with two axes four mirrors, and with all three axes eight mirrors).

you must, if you want to break the clipping, un-select Clipping to be able to move vertices away from the mirror.

Vertex Groups
When this button is enabled, the Mirror modifier will try to mirror existing vertex groups. A nice feature that has otherwise specific prerequisites.

Usually, the mirrored copies of the vertices of a group remain in this group. Once this option is activated, all groups following the rules described above will only be valid on the original object – the mirrored copy will put these same vertices into the “mirror” group. Very handy with armatures, for example: you just model half of your object, carefully rig it with half of your armature, and just let the Mirror modifier build the other half. Just be sure to put your Armature modifier(s) after the Mirror one.
A final word about multi-axes mirror: in these cases, the “direct”, “first level” copies get the mirrored groups, the copies of copies (“second level”) get the original groups, et cetera.

Merge Limit
The maximal distance between vertices and mirror plane for the welding between original and mirrored vertices to take place. The vertices then will snap together, allowing linking the original mesh to its mirrored copy.

Mirror Object
The name of another object (usually an empty), to be used as the reference for the mirror process: its center and axes will drive the plane(s) of symmetry. You can of course animate its position/rotation (Ipo curves or others), to animate the mirror effect.

Many modeling tasks involve creating objects that are symmetrical. However, there used to be no quick way to model both halves of an object without using one of the workarounds that have been discovered by clever Blender artists over the years. A common technique is to model one half of an object and use AltD to create a linked duplicate which can then be mirrored on one axis to produce a perfect mirror-image copy, which updates in real time as you edit.

The Mirror modifier offers another, simpler way to do this. Once your modeling is completed you can either click Apply to make a real version of your mesh or leave it as is for future editing.

When using the Mirror modifier along with the Subsurf modifier, the order in which the modifiers are placed is important. 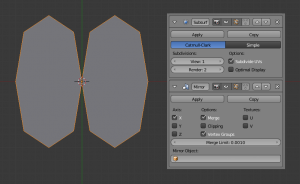 This shows the Subsurf modifier placed before the Mirror one; as you can see the effect of this is that the mesh splits down the center line of the mirror effect. 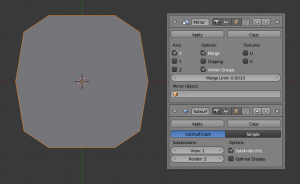 This shows the Mirror modifier placed before the Subsurf modifier. In this order you will get the the center line of the mesh snapped to the center line, which in most cases would be the desired effect.

To apply a Mirror modifier, it is common to have to move the object’s center onto the edge or face that is to be the axis for mirroring. This can be tricky when attempted visually. A good technique to achieve an exact position is to determine the edge against which you wish to mirror. Select two vertices on that edge. Then use ⇧ ShiftS followed by Cursor to Selection (C). This will center the 3D cursor exactly on the edge midway between the two vertices. Finally, press CtrlAlt⇧ ShiftC for the Set Origin popup, then select Origin to 3D Cursor (T). This will move the object’s center to where the 3D cursor is located, and the mirroring will be exact.

An alternative is to use an Empty as a Mirror Object that you move to the correct position.