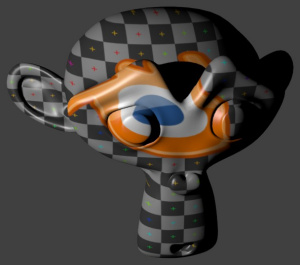 The UV Project Modifier acts like a slide projector. It emits a UV map from the -Z axis of 'Projector' objects, and applies it to the object as the "light" hits it. It can optionally override the object's face texture. 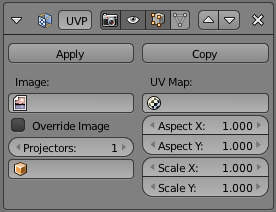 UV layer
Which UV layer to modify. Defaults to the active rendering layer.

Image
The image associated with this modifier. Not required; you can just project a UV for use elsewhere. Override Image, below, defines how the image is used.

Projectors
Up to ten projector objects are supported. Each face will choose the closest and aligned projector with its surface normal.
Projections emit from the -Z axis (i.e. straight down a camera or lamp).
If the projector is a camera, the projection will adhere to its perspective/orthographic setting.

Aspect X/Y and Scale X/Y
These allow simple manipulation of the image. Only apply when a camera is used as projector Object.

The modifier's Image property is not generally used: instead, a Texture mapped to the UV layer that the modifier targets is added to the object's Material. This allows you to prevent the image from repeating by setting Texture → Image Mapping → Extension to Clip.

When using perspective cameras or spot lamps, you will likely want to enable the UV Project Material Option (available in the materials panel), This uses a different UV interpolation to prevent distortion.

Note: This option is not yet available for Cycles