This is documentation on the implementation of the Data API, there is also some Example Code. Help is wanted getting all Blender data wrapped! See the List of Tasks.

The implementation is in the blender2.5 branch, in the makesrna module. The important files to understand the system are: 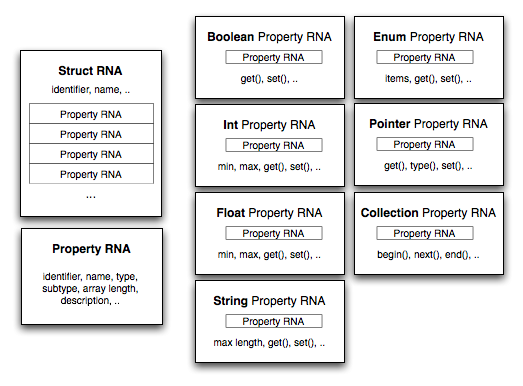 Structs and their properties are defined in rna_*.c files in the makesrna module, and the definitions are generated as part of the build system. Errors will be printed during build and will help debugging.

Next in the RNA_def_* function the struct must be defined. RNA_def_struct defines the struct itself. We must define an identifier which is a unique name and used for identifying the struct in code, and a name which is a human readable name.

For each struct it is also possible to set a string property as being the name of that struct, which will be used in the UI and for doing string lookups in collections.

For ID struct, it is also necessary to:

For each property we start with RNA_def_property. A identifier must be specified similar to a struct. Next to that we have to define a type and a subtype. The type defines the data type, the subtype gives some interpretation of the data, for example a float array property may be a color, a vector or a matrix.

Again the system will try to find a property with the same name as the identifier in the DNA struct, if it has a different name, the next thing to do is to correct specify it with a RNA_def_*_sdna function. This DNA information is used to derive various things like a get/set function or iterators for collections, array length, limits, etc, and rules for how the mapping works are explained in the next section.

It is possible to override these afterwards if the automatic values are not correct. The file RNA_define.h gives an overview of the information that can be supplied for the different types. Important things to define are the array length, range for numbers, and items for an enum.

Next we have to define a default value. If not defined explicitly it is assumed to be 0 for numbers, "" for strings, NULL for pointers and an empty collection.

For building UI's more automatic also a human readable name and description for tooltips are defined. For numbers a soft range, stepsize for dragging and precision can be defined. These will be the default values when making buttons from RNA properties.

In many cases the automatic DNA matching will take care of this, but in other cases we must next define callback functions for get/set functions. Their names can be passed with the RNA_def_property_*_funcs functions, see RNA_types.h for their arguments. Collections are the most difficult, though ListBase and typical arrays can be automatically supported. Note that some function calls are optional, and will only help in optimization, for example the lookup functions for lists. 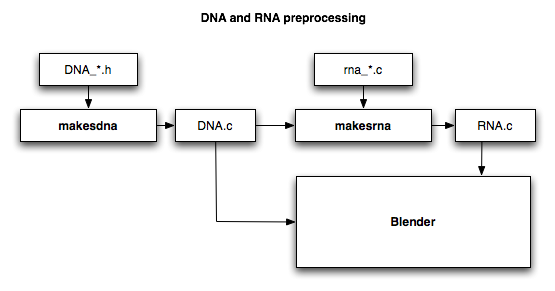 Here is a list of abbreviations accepted for property names

Should have the prefix

strings that deal with file paths have the following conventions

The RNA defitions are generated in a way similar to DNA preprocessing, in advance as part of the build system. Such a preprocessing step avoids manually writing much API code, taking advantage of the available information from the DNA system. Also it should avoid startup overhead since the result of the definitions would be baked into the source code. For python/plugin ID properties however this would still need to be done at runtime, though the code currently those not support that.

The definition is separate from the DNA files instead of embedded in comments, as in earlier other proposals. This is necessary because structs/properties do not necessarily have a one-to-one mapping with DNA structs/members. Multiple properties might be part of one DNA struct member, for example in the case where booleans are stored as bitflags. And one property might be based on multiple DNA struct members, for example a mesh vertex collection which consists of both mvert and totvert.

The autogenerated code currently goes into a single RNA.c file. It would be possible to write this into existing files, in blenkernel for example, but it seems a bit risky and inconvenient doing this, if those files are being edited at the same time in an IDE for example. 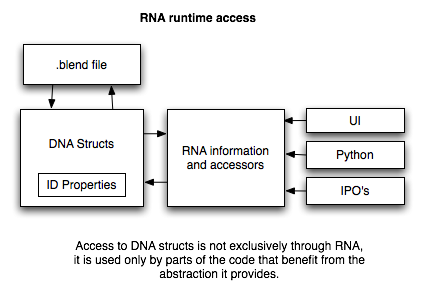 Runtime access to property values is done through the functions defined in RNA_access.h. Basically get/set functions and a collection iterator are provided. 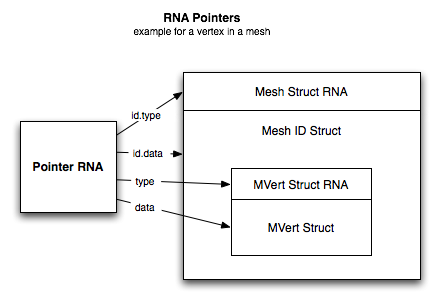 A pointer to an RNA struct is always wrapped in a PointerRNA struct. This contains the actual data pointer and the struct type. It also contains the data pointer and the type of the ID datablock that the data belongs to. This is necessary in some cases, as for example a vertex by itself does not provide enough information to update the dependency graph, we need to know the mesh this vertex came from.

Property functions callbacks get such PointerRNA's instead of direct pointers to the data, so that they can use the ID data if needed. The pointer and collection get/set function callbacks return the data pointer, the type and ID will be automatically filled in outside of the callback. 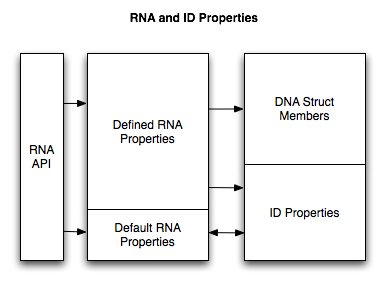 When registering the operator the RNA struct will be automatically creating, only the properties have to be created for the struct pointed to by ot->srna.

When RNA properties are set, updates may be needed in Blender to ensure dependencies are correct or editors are redraw. Each property can have an associated update() function that is run after set(), and a notifier.

The current code contains experimental functionality to refer to structs and properties with a string, using a syntax like: scenes[0].objects["Cube"].data.verts[7].co.

This provides a way to refer to RNA data while being detached from any particular pointers, which is useful in a number of applications, like UI code or Actions, though efficiency is a concern, and it not sure if this will end up being useful.

There are some property flags to indicate dependencies. How and if this will be used is not clear yet, though this could be an interesting system to generate dependency graphs more automatic. However there are some issues with this, for example the system cannot know if a modifier is disabled for example, and so it might count unnecessary dependencies, unless the dependency could also be checked runtime with a callback.

Additionally dependency graphs more fine grained than between full objects, and functionality like groups and proxies may be difficult to support, and the dependency graph may not be worth/feasible trying to change that much for 2.5.