This script started as a proof of concept developed by Campbell Barton for the render API introduced with Blender 2.5. It could render most geometry types right from the start by converting them to triangles.

Constantin Rahn improved formatting and control of output files including the first ability to export animation.

Bastien Montagne improved the overall architecture of the script and its integration with Linux.

After May the 10th 2011, some development to the script limited backwards compatibility: If you set up some files prior to that and always use the latest exporter from SVN. It is advised to run the update script and save your scene again with the new version: get to the search bar with Space and type 'pov' to access this command.

Povray 3.7 is now in RC7. Release is imminent and just waiting for the end of the documentation update. Some change to the SSTL syntax will require a refresh of Blender's SSS exporting as soon as POV's next release candidate (whether as the official release or not)is available

-Lattices made scenes crash the export

'The idea is two step:

this even, if it requires a little "unnatural" pov approaches.

the use of custom codes. 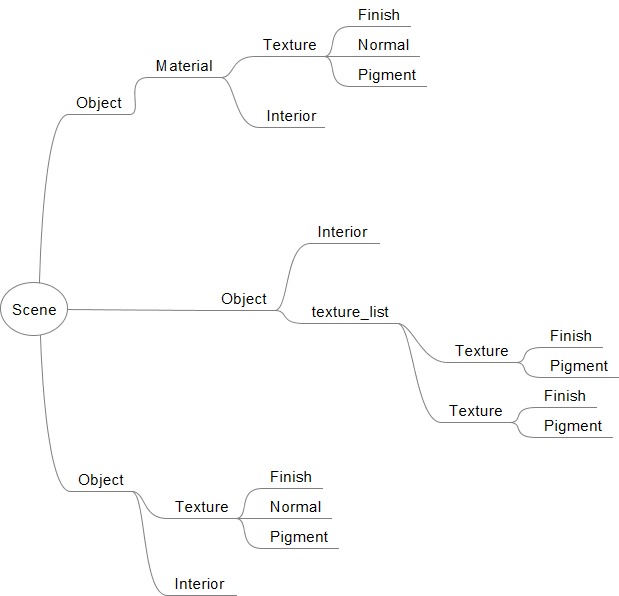 Objects are the building blocks of your scene. There are a lot of different types of objects supported by POV-Ray. they are also sometimes called primitives. The mesh object often exported from Blender is just one of the possible primitives supported by POV, but it's one that allows to make the most profitable use of the exporter because a sculpted mesh is easily done in Blender interface and practically impossible to do with POV-Ray alone. The second stage of the exporter's development will allow to use more POV native primitives through Blender interface.

In any case the pov object contains the geometry and can also have the material block, if there is one, at the same hireachical level. This type of construction could be compared to Blender use of "Object Material"

In POV-Ray, there used to be only texture properties inside an object and interior properties such as Index of Refraction could be declared in the same block.

But the developers thought "It is totally illogical to have a ray enter an object with one index or refraction and then recalculate with another index" in the case of multitextured objects.

Nowadays, POV-Ray texture still contains the properties ruling interaction between an object and its environment, such as reflectivity, roughness etc. while Interior stands for internal properties that have an incidence on the light that crosses the surface: index of refraction, media scattering or absorbing light, etc.

For easier reference with a single identifier in a texture library, a wrapper around texture and interior has been created which we call 'material'

POV-Ray textures are combinations of pigments, normals, and finishes.

If the texture is not put inside a material statement, it can be put directly inside the geometry of the object, it allows to apply different textures to different parts of the object through a texture list and texture indices assigned per face.

The exporter exploits this feature for meshes with several materials. This type of construction could be compared to Blender's Data material. However, in POV-Ray, all the textures still share one common set of interior properties per object.

What's in a "texture"

A little different as it can be patterned

what is impossible in POV: map with various specular color What remains: most complex exported material case

[Mindmap of the most complex datafow]

all this duplicated with min and max specular

If you want to add some fucnctionality or fame to POV exporter, here are a few planned tasks, from the easiest to more complex among which to pick:

OTHERS Stacked (more or less) according to priority.

At the end, Completed tickets must not be deleted until some documentation is at least linked to from the user page.