Unlike the Near and Radar object it can:

Other than that, the sensor objects are ordinary objects. You can move them freely or parent them. When parented to a dynamic object, they can provide advanced collision control to this object.

The type of collision capability depends on the shape:

All these values were already accessible from Python except phys:

The scenegraph improvement consists in avoiding position update if the object has not moved since last update and the removal of redundant updates and synchronization with the physics engine and the Rasterizer.

Opţiunea "Occluder" trebuie folosită doar pe obiecte de tip reţea. ..........As far as Physics is concerned, it is equivalent to "No collision".  The reason why I chose to make the Occluder mode mutually exclusive with other physics mode is to emphasize on the fact that occluders should be specifically designed for that purpose and not every mesh should be an occluder. However, you can enable the Occlusion capability on physics objects using Python and Logic bricks. We'll come to that.

When an occluder object enters the view frustrum, the BGE builds a ZDepth buffer from the faces of that object. Whether the faces are one-side or two-side is important: only the front faces and two-side faces are used to build the ZDepth buffer. If multiple occluders are in the view frustrum, the BGE combines them and keeps the most foreground faces.


The resolution of the ZDepth buffer is controllable in the World settings with the "Occlu Res" button:

By default the resolution is 128 pixels for the largest dimension of the viewport while the resolution of the other dimension is set proportionally. Although 128 is a very low resolution, it is sufficient for the purpose of culling. The resolution can be increased to maximum 1024 but at great CPU expense.


The BGE traverses the DBVT tree and for each node checks if it is entirely hidden by the occluders and if so, culls the node (and all the objects it contains).


To further optimize the feature, the BGE builds and uses the ZDepth buffer only when at least one occluder is in the view frustrum. Until then, there is no performance decrease compared to regular view frustrum culling.

How to use it

There are situations where occlusion culling will not bring any benefit:

Occlusion culling makes most sense when the occluders are large objects (buildings, mountains, ...) that hide many complex objects in an unpredictable way. However, don't be too concerned about performance: even if you use it inappropriately, the performance decrease will be limited due to the structure of the algorithm.


Occluders can be visible graphic objects but beware that too many faces will make the ZDepth buffer creation slow. For example, a terrain is not a good candidate for occlusion: too many faces and too many overlap. Occluder can be invisible objects placed inside more complex objects (ex: "in the walls" of a building with complex architecture). Occluders can have "holes" through which you will see objects.


Here is a possible workflow to create occluders from a complex terrain:

To optimize further, you may split the occluder into several objects (make an occluder from each mountain, each wall, etc.) and do the same for the terrain: this way, parts of the terrain that are behind occluders will not be rendered.

You can verify how the occlusion is working by running the game in wireframe mode.

You can turn on/off the occlusion capability of an object with Python:

The object doesn't need to be defined as an occluder in the GUI: you can enable occlusion capability on any mesh object, including static and dynamic objects during the game.

You can also use the Visibility Actuator: 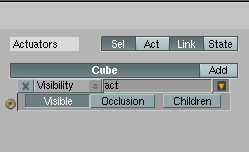 Note that the actuator sets the Visibility and Occlusion mode at the same time. If you need to set them separately, use Python.

The option interacts with the other sensor option in this way:

A new bookmark button is available on the controller UI. When set, the controller is guaranteed to execute before all other non-bookmarked controllers, provided it is scheduled for execution.

This is useful for initialization scripts that run once at startup or scripts that must set some prerequisite for the other controllers at the start of each logic frame.

This feature is also available at python level with the "useHighPriority" attribute. It can be changed during the game.

Note that if several script are bookmarked, their relative order of execution is not guaranteed. Make sure they don't depend on each other.

Added support for any number of attributes, this means packages are supported automatically. As well as "myModule.myFunc" you can do "myPackage.myModule.myFunc", nested packages work too. The python controller is passed to the python function as an argument for functions that take 1 arg.

This allows live editing of scripts

There are many minor bugs that where fixed since 2.48a, this list shows bugs users might have noticed.