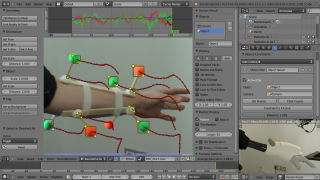 Object tracking support has been added, so that not only camera animation can be reconstructed from footage, but also the animation or transformation of objects in the scene. - r43007

There is now a list of objects to be tracked, with by default a single Camera object used for solving camera motion. Other objects can be added and each of them will have its own list of tracks. Only one object can be used for camera solving at this moment. A new "Object Tracking" constraint was added, which can be added to objects to apply the reconstructed animation. This constraint can be converted to F-Curves like all other motion tracking constraints - r43119.

Tracks copy/paste operator can be used to copy tracks from one object to another (which is useful when features were occasionally tracked in wrong object) - r43244. 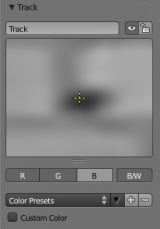 Internally, tracking algorithm is using grayscale version of frames when tracking happens. It's not always obvious which channels gives highest contrast of feature and also not always obvious which color channel contains more noise and better to be disabled. Now this widget displays actual image which tracking algorithm is using when some color channels are disabled. It is also possible to make it display grayscale image for all channels enabled. - r42996

By default Follow Track constraint is making object have the same position at frame as track has and motion of this objects happens on a single plane defined by camera and original object position.

Since r43134 it's possible to set Depth Object in Follow Track constraint. If this object is set, constrained object would be projected onto surface of this depth object which can be used to make faked facial makeup.

Other improvements and fixes