Due to this, there are some new features for all paint modes, and some implemented specifically for texture painting.

Options were grouped more consistently between paint modes in this release. Stroke modes can be changed via a drop-down menu and by pressing A in the viewport. For modes that support masking, A selects everything instead, when masking is active.

Spacing based on stylus pressure. More pressure means dabs are closer together.

Jittering of strokes in 2.66 is done relatively to the brush size. It is possible now to set the jittering amount in pixels, keeping the size independent and allowing for brush spreads greater than before. To switch to absolute mode, press the lock icon next to the jittering amount slider. 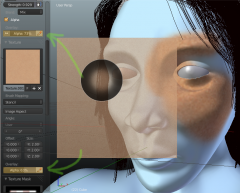 All paint modes that use textures now support overlay. Overlay now works slightly differently than older blender versions. There is separate overlay control for the brush itself (under the tool options) and for brush textures. There is also the ability to turn a specific overlay off while a stroke is in progress by clicking the brush icon next to the overlay slider.

Simply picks a random texture coordinate to sample from for each dab.

Stencil mapping works by displaying an overlay which users can place on the viewport and paint in a stencil-like way on their mesh. Painting outside the boundaries of the stencil will fail. To control the position, rotation and scale of the stencil, use:


When using stencil scaling, X and Y are used to constrain the scaling to one axis. Pressing one of the buttons twice reverts to unconstrained scaling.

Because of scaling, it is possible to scale an image to aspect ratios different than the original image and introduce stretching. To restore the aspect ratio of the original image, use the Image Aspect button below the brush mapping. This option is only visible for image textures. This operator can even use the tiling and scale values of the brush texture if the relevant operator properties are enabled.

It is also possible to restore the position of the stencil. To do that press Reset Transform

Note: When using stencil mapping it is not possible to deactivate the overlay!

Stencil mapping is supported on the new alpha mask textures too. To manipulate the alpha stencil, use

Alpha masking a pattern on a model, model by vitos1k.

Setting properties for mask textures in the texture properties editor is currently somewhat tricky. In cycles, it is possible to select the mask texture through the texture selection drop-down menu but in blender internal, users are required to pin the context and browse to the assigned mask texture, since the default texture displayed in the unpinned context will always get assigned to the primary brush texture. 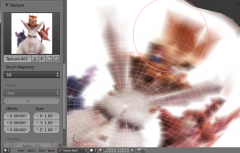 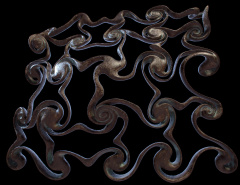 The twist brush has undergone refactoring to become easier to use and produce more interesting results. To use it, start the brush on the object and drag away from the center. The initial drag direction is the zero angle and by rotating around the center you can create a vortex effect. The sculpt plane has direct influence on the direction of the twist. The area plane twists around the normal of the area at the centre of the brush while the view plane twists around an axis perpendicular to the screen. This latter mode can be used as a posing tool.

Comparison between old and new behaviour on the right: