This is done by scaling reconstructed scene in a way so reconstructed cameras variance is unity with a median in the 3D scene origin.

Such approach helps in cases when different keyframe pair gives the same exact reconstruction from math point of view but some of which could be considered bad by artists because of bad scale.

This is an alternative to using camera to scale the scene and it's expected to be better :solution because scaling camera leads to issues with z-buffer.

This is very useful feature for scene orientation, when you'll just scale camera by S in the viewport to match bundles some points in the space, and then you'll easily make camera have identity scale (which is needed for nice working motion blur without loosing scale of bundles themselves.

Behavior of apply scale for cameras without clip assigned to them does not change at all.

This operator will run a tracker from previous keyframe to current frame for all selected markers. Current markers positions are considering initial position guess which could be updated by a tracker for better match.

Useful in cases when feature disappears from the frame and then appears again. Usage in this case is the following:

Depending on direction of tracking use either Forwards or Backwards refining. It's easy: if tracking happens forwards, use Refine Frowards, otherwise use Refine Backwards. 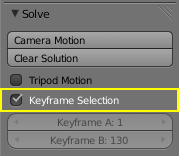 This option enables some fancy math algorithms which tries to find a keyframe pair with minimal reconstruction error and best scene scale guess.