Blender internally stores angles as radians (even though they are presented through UI as degrees), but in a few places degrees were still being stored, which added internal code clutter, and could generate bugs like T32843.

In order to support a better animation workflow, two options are available in the header of the FCurve Editor editor: 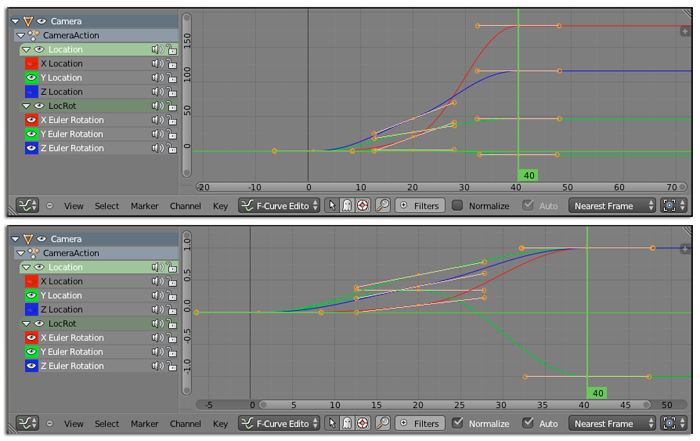 FCurve Noise Modifer now has an extra float property which offsets the noise in time. This is useful for creating follow through in procedurally animated noise. 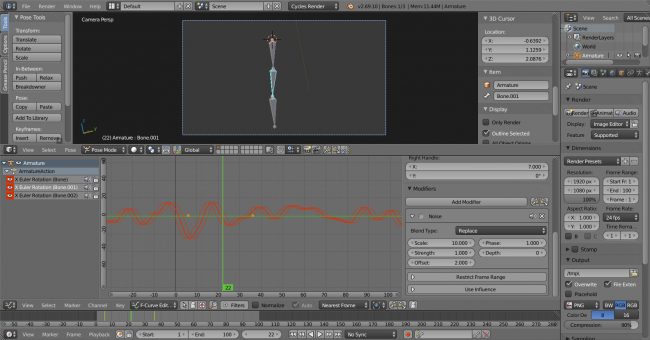 For example, if you've used a noise modifier on a parent bone to add additional movement, a quick and easy way to add overlapping motion is to create copies of that modifier on its children, and then offset the time those curves play at.

It is available as a dedicated baker method and implemented for both regular and baking from multires.

By default it does auto-normalization of derivative map, so data in it's channels is spread over 0..1 range. But it's also possible to apply user scale (the same scale is to be used for an influence when using this derivative map).

Support for baking vertex colors to textures was added (r60656)

It allows baking the active vertex paint layer to an image, allowing for effects like baking vertex based dirt maps.

Added mask overlay to both image and clip editors.

Mask overlay could be enabled from Mask Display panel and two modes of overlay are supported:

Masks can now fill self intersections and optionally disable calculation of holes.

There are 2 new layer options to control filling.

There's one change in sequencer editor which worth special mentioning to prevent possible frustration.

In previous releases effect in the sequencer editor used to blend with it's inputs. It might have been useful in some specific cases, but was unacceptable when blending transparent images.

Old behavior would have mix blend result with blend inputs, this issue was reported T38598.

Now effect wouldn't blend together with it's inputs which is rather expected behavior but which might break some setups which relied on the old behavior of sequence rendering.