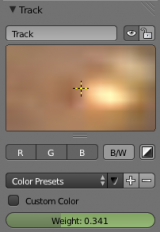 A very common problem when performing a camera or object track is when a trackable feature in a video clip suddenly is unavailable. This happens when the tracked feature moves out of frame or behind something that blocks the camera's view. This problem is worsened when there are few available features to track, and the feature that is leaving the frame or being blocked from view, is closer to the camera than the other tracking markers. The sudden decrease of perspective information causes the solver to calculate erratic jumps in the camera motion. This type of error can look bad or could even ruin your entire shot.

Another use of Track Weigths is when you want to reconstruct a scene from your camera solution. In that case you can first carefully track and solve your scene, and once you're done, lock all your markers with Ctrl+L, set the tracker weight in the Extra Settings of the tracker settings to 0 and use the feature detection to quickly add lots of markers. Now track them and solve the scene again. Since their weight is 0 they will not influence your solution at all, but you will have lots of good reference points in your scene. Here is a video to demonstrate it:

Here is a quick tutorial from Sebastian Koenig about plane track image.

Now a new detector is has been put into effect which is called by it's author's name: Harris. The Harris Detector works a little slower and will detect fewer features than the FAST library, but the quality of the features is expected to be higher.