Commit daccaa713b6e66af4b958fa373b31d557a4caa33 introduces support for a number of new interpolation types which are useful for motion-graphics work. These define a number of "easing equations" (basically, equations which define some preset ways that one keyframe transitions to another) which reduce the amount of manual work (inserting and tweaking keyframes) to achieve certain common effects. For example, snappy movements, and fake-physics such as bouncing/springing effects. 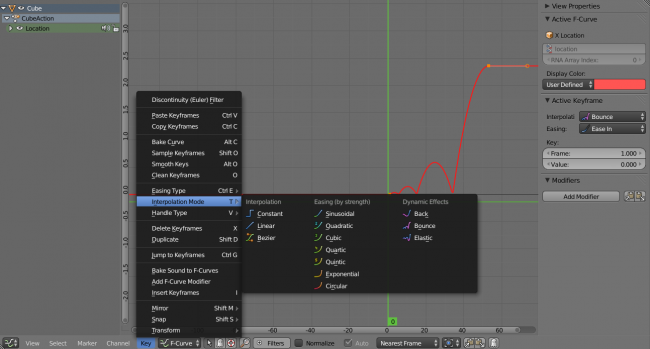 The additional interpolation types introduced in this commit can be found in many packages and toolkits (notably Qt and all modern web browsers). For more info and a few live demos, see http://easings.net and http://www.robertpenner.com/easing/

From least dramatic to most dramatic, the transitional types are as follows:

In addition to these easing types, there are also a number of types which imitate physics-based effects:

The amplitude, period, and back settings can be found in the Active Keyframe panel in the Properties Region (NKEY).

The "easing" property controls which end of the segment between the two keyframes that the easing effects apply to.

The Transform constraint has been modified, so that the mapping factors get valid units (length for location, none for scale, and angle for rotations). Unfortunately, this involved compatibility issues with older files (2.70a and earlier) which would animate those settings (either by FCurves or drivers). In such case, please manually run the “Update Animated Transform Constraints” operator (from the space-bar menu) - only once (since it converts degrees to radians, using it more than once would break again angle values).

This commit (9c28a24) cleans up and fixes some problems related to how the auto-snapping behaviour in the animation editors works, resolving the issues mentioned in T39819.

Jumping between keyframes only considers selected data by default

Made the timeline option to only show keyframes from selected channels/data be a per-scene setting (and enabled by default) instead of the per-timeline option it was previously (c261052). This makes it easier for animators working on rigs with multiple bones (especially during the polishing phase), since now the timeline and jump to keyframe operators use the same setting to decide which subset of keyframes they need to consider.

Several tweaks were made to the NLA Editor interface to polish the interface and hopefully make the "animation layer" workflow intentions clearer.

The most noticeable is that the code behind the "NLA Action" channels has now been refactored to use the system used for the rest of the animation channels. As a result of these changes: