Current blender code doesn't handle cleanly and accurately the refresh to all changes to objects implied by parenting and deformers. Current method is also slow with armatures as everything is calculated twice. This project aim to create a dependency graph to both evaluate things in the correct order, and update only those which need to.

The correct way of handling such dependencies is a directed acyclic graph (DAG). This is a very common and well studied structure in graph theory which can be applied to the task. It can be viewed as an extension of the tree structure where branches are allowed to merge. DAGs are very often used for scheduling applications.

Once the DAG is built, it can be queried to show which object depends on another, and also find an order of evaluation respecting all dependencies as long as there are no cycles in them. As a secondary task, it can be used to check a new relation won't induce cycles. We will see that those simple tasks provide quite versatile services. If a cycle is created by a new relation, we need to create rules for breaking this cycle. The relations forming a cycle (strongly connected components) can be considered as a single node in the DAG for evaluation order of other relations. 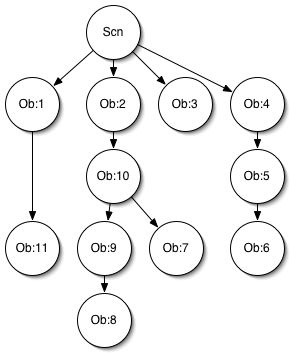 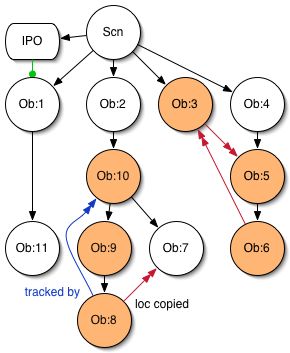 fig 1 shows a typical tree. Arrows show the parenting relations. As an object can have only a single parent, we can define easily an order for calculating the transformations.
We have attached all root objects to the scene in order to have a single graph, and not many separate ones.

fig 2 shows IPOS and constraints attached. Note that relations are inverse of constraints, to show which depends on which. We have 2 cycles here, 8-9-10 & 3-5-6. 7 is not part of a cycle. the DAG cannot handle this and deliver a valid order, so cycles must be broken outside of it.

Those dependencies affect objects as a whole and so are independent of the deformers below.
On those, only constraints can create a cycle. Object constraints can also link to armature bones. In this case, the whole bone system must be promoted at object level? 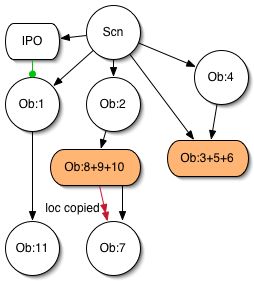 As stated previously and as shown in fig 3, a valid DAG can be returned if we consider each cycle as a single node. It is then up to the caller to break the cycle.

Time IPOs can also offset other IPO positions in each object and so are ancestors of any same object IPO.
Is path a first level constraint ? (I think so).

Duplis can't be calculated before deformers.

Once relations of this class are calculated, we can continue on other relations, after having done the transformations in the topological sort order of the DAG. We are sure this order is correct and won't change. The only exception is vertex children that we can't calculate yet. The sub-DAG of all the object is calculated once.

object/vertex class with object being a control object

Same calculations as in previous level. Those relations are most likely independent subgraphs. However we can have strongly dependent components and/or mutual constraints, so this step can be repeated more than one time. The goal here is to get a correct transform, without the lags that affect complex armatures in blender. By the way, that means that old armatures can behave differently once we switch to new code, so we must ask ourselves if we do the switch or give the new system alongside. My preference goes to the latter for compatibility reasons.

This class is a bit special, as to solve it, we need either to promote the mesh at object level (not very smart imo) or to cut the DAG in 2 evaluated in order, the 2nd DAG including all parents and children of the parented object siblings

We can either rebuild the DAG each time we need it (less efficient but also less intrusive to blender code), or dynamically by updating it at each change. The 2nd solution gives us more liberties and insures things are evaluated in the same order in subsequent frames (can be useful if we had to break a cycle).

As a first step it's easier to rebuild each time, DAG code itself is simple (we dont neeed insane optimisations, the number of relations is reasonable), the real meat is in correctly taking all informations from scene-base.

We will use an adjacency list structure (see upper) which can store both a DAG and a cyclic graph.

The DAG is used to get only an order of evaluations so it should be as independent as possible and not act directly on objects.

Evaluating and using the DAG

Python access to objects vars can do some mess in that too, and must be taken in account.

As discussed with Ton, a nice thing to do is to use the oops window to optionally show the DAG and relationships.
It will be also useful when coding system.

Ton thinks that we can merge the vertex and objects nodes as single. Must be checked.