Blender has many different mesh types, each with data structures adapted to the task at hand. DerivedMesh provides a single interface for reading and drawing multiple mesh types. Here is an overview of the most important ones for this document.

This is the data structure that is used to hold the contents of Mesh datablocks. It is also written directly to file. Mesh stores its vertices, edges and faces in arrays. For this datatype memory efficient storage and fast drawing is most important.

Derived Mesh provides an abstraction of multiple Mesh data types. This way reading data from and drawing different types of meshes can be done using a single interface. When modifiers are applied to meshes, the resulting mesh is returned as a DerivedMesh. How elements are stored is decided by the backend. DerivedMesh also provides optional storage for elements and custom data as arrays, if the backend decides to use this. 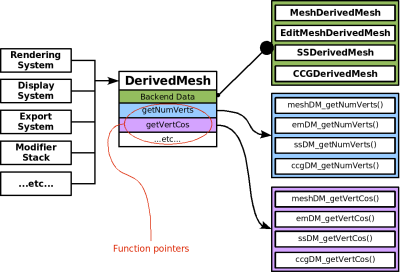 DerivedMesh operation
An illustration of the role of DerivedMesh in the system.

The DerivedMesh interface is illustrated in (DerivedMesh operation). It consists of a number of function pointers, that are implemented by different backends. It has functions to:

DerivedMesh has multiple backends that implement the functions mentioned above. This avoids having to copy the results to a common mesh data structure everytime, and so saves memory and time.

This data structure is used instead of cdDM for efficiency. CCGSubsurf can be incrementally updated with changes, for faster repeated computation of the result. Drawing of ccgDM is optimized by using quad strips.

Some more info on modifiers: BlenderDev/Modifiers