F-Curve modifiers are similar to object modifiers, in that they add non-destructive effects, that can be adjusted at any time, and layered to create more complex effects.

The F-curve modifier panel is located in the Properties panel. Select a curve by selecting one of its curve points, or by selecting the channel list. Click on the Add Modifier button and select a modifier.

To add spin to an object or group, select the object/group and add a keyframe to the axis of rotation (x,y, or z)

Go to the Graph Editor.....make sure the f-curves properties panel is visible (View > Properties)

All of modifiers have common the top and bottom parts of their panel.

Top (from left to right):

A small arrow
This control allows you to show/hide the modifier settings.

The “X” control
This will remove from the Modifiers panel the modifier.

Bottom (from up to down):

Restrict Frame Range
F-Curve Modifier is only applied for the specified frame range to help mask off effects in order to chain them.

Use Influence
F-Curve Modifier’s effects will be tempered by a default factor.

Influence
Amount of influence F-Curve Modifier will have when not fading in/out. 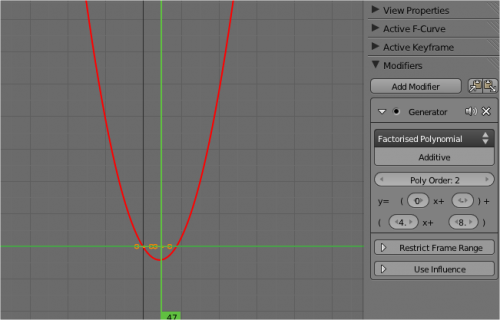 Generator creates a Factorized or Expanded Polynomial function. These are basic mathematical formulas that represent lines, parabolas, and other more complex curves, depending on the values used.

Additive
This option causes the modifier to be added to the curve, instead of replacing it by default.
Poly Order
Specify the order of the polynomial, or the highest power of ‘x’ for this polynomial. (number of coefficients - 1).

Change the Coefficient values to change the shape of the curve. See The Wikipedia Page for more information on polynomials. 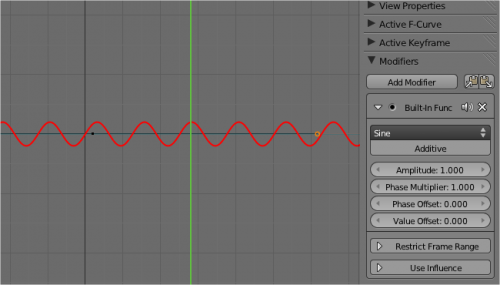 These are additional formulas, each with the same options to control their shape. Consult mathematics reference for more detailed information on each function. 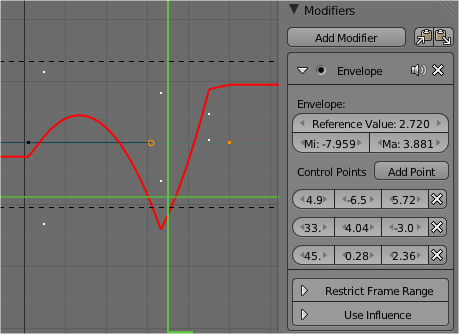 Allows you to adjust the overall shape of a curve with control points.

Cycles allows you add cyclic motion to a curve that has 2 or more control points. The options can be set for before and after the curve.

Repeats the curve data, while maintaining their values each cycle.

Each cycle the curve data is flipped across the X-axis.

Before/After Cycles
Set the number of times to cycle the data. A value of 0 cycles the data infinitely.

Modifies the curve with a noise formula. This is useful for creating subtle or extreme randomness to animated movements, like camera shake.

Adds a 0 to 1 range noise function to the curve.

Subtracts a 0 to 1 range noise function to the curve.

Multiplies a 0 to 1 range noise function to the curve.

This can use Python script to generate values over time that are relayed to the parameter they are assigned to. It is mostly using with working F-curves in Drivers mode.

Minimum/Maximum X
Cuts a curve off at these frames ranges, and sets their minimum value at those points.
Minimum/Maximum Y
Truncates the curve values to a range. 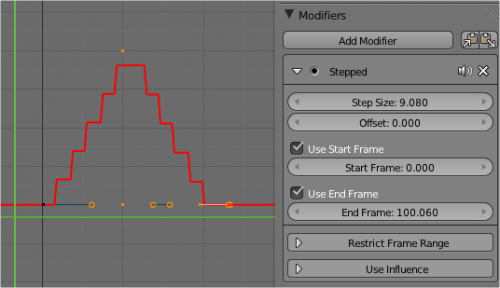 Gives the curve a stepped appearance by rounding values down within a certain range of frames.