Markers are used to denote frames at which something significant happens – it could be that a character’s animation starts, the camera changes position, or a door opens, for example. Markers can be given names to make them more meaningful at a quick glance. They are available in many of Blender’s windows, under different forms. Unlike the keyframes, markers are always placed at a whole frame number, you cannot e.g. set a marker at “frame 2.5”.

Markers can be created and edited in all of the following editors (including their different modes):

A marker created in one of these windows will also appear in all others that support them, including:

There are Timeline Markers and Pose Markers in Blender.

Timeline markers are used to:

Pose markers is another type of markers, that are specific to the armatures and are used to denote poses in the Action Editor mode of Dope Sheet editor.

With this enabled, creating markers will add only pose markers in the Action Editor!

With Show Pose Markers disabled, you may select and edit only timeline markers in the Action Editor.

Pose markers are related to the pose libraries, and are discussed in detail here.

Timeline markers is possible to convert to the Pose markers with Marker > Make Markers Local. Note that the original Timeline marker will be gone. If you want to keep it, make a duplicate before you convert.

Most of the window types visualize markers the same way: as small triangles at their bottom, white if unselected or yellow if selected.

If they have a name, this is shown to their right, in white when the marker is selected. See (Timeline markers: small but useful).

Marker in a 3D View.

The 3D View windows do not allow you to create/edit/remove markers, they just show their name between <> at there bottom left corner, near the active object’s name, when you are at their frame (see Marker in a 3D view).

Pose markers in the Action Editor mode of the Dope Sheet editor.

Pose markers are created automatically at the moment adding new pose in Pose Library. Methods of the editing are same for both Timeline and Pose markers.

The simplest way to add a marker is to move to the frame where you would like it to appear, and press M.

Alternatively, you can press AltA (or the “playback” button of the Timeline window) to make the animation play, and then hit M at the appropriate points. This can be especially useful to mark the beats in some music.

on the marker’s triangle to select it. Use ⇧ ShiftRMB

To (de)select all markers use A. There are using border (de)select them with B.

The corresponding options are found in the Select menus of the editors, where the markes are using.

Having dozens of markers scattered throughout your scene’s time won’t help you much unless you know what they stand for. You can name a marker by selecting it, pressing CtrlM, typing the name, and pressing the OK button.

Once you have one or more markers selected, hit G to move them, and confirm the move with LMB

or ↵ Enter (as usual, cancel the move with RMB

You can duplicate the selected markers by hitting ⇧ ShiftD. Once duplicated, the new ones are automatically placed in grab mode, so you can move them where (or rather when) you want.

To change cameras mid-animation, you need to use markers.

Note that markers behave like keyframes, so you will need at least two markers with two cameras bound to them to have any camera switching.

For quickly "bind camera to marker" by following the step-by-step below: 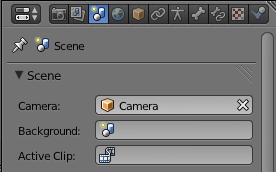 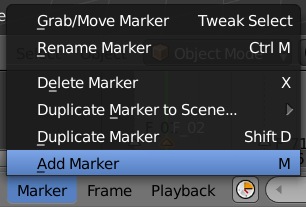 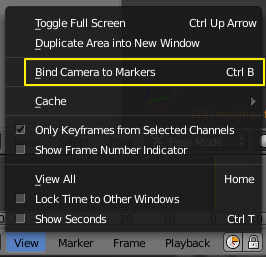 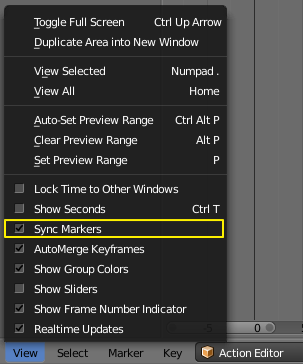 Option Sync Markers in View menu of the Action Editor mode of the Dope Sheet editor.

Anothe the usage Timeline markers is synchronization timing keyframes with markers in the Dope Sheet and Video Sequence Editor (the option Sync Markers in View menu). This allows to tape editing or final cut yours actions, sequences, scenes, movie and audio clips.