The Follow Path constraint places its owner onto a curve target object, and makes it move along this curve (or path). It can also affect its owner’s rotation to follow the curve’s bends, when the Follow Curve option is enabled.

The owner is always evaluated in the global (world) space:

The movement of the owner along the target curve/path may be controlled in two different ways:

Follow Path is another constraint that works well with the Locked Track one. One example is a flying camera on a path. To control the camera’s roll angle, you can use a Locked Track and a target object to specify the up direction, as the camera flies along the path. 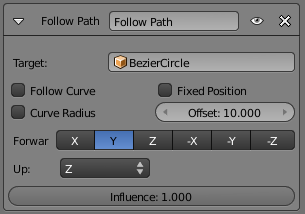 Target
This constraint uses one target, which must be a curve object, and is not functional (red state) when it has none.

Curve Radius
Objects scale by the curve radius. See Curve Editing
Fixed Position
Object will stay locked to a single point somewhere along the length of the curve regardless of time
Offset
The number of frames to offset from the “animation” defined by the path (by default, from frame 1).
Follow Curve
If this option is not activated, the owner’s rotation isn’t modified by the curve; otherwise, it’s affected depending on the following options: