The interactive console in Blender 2.5 has been improved. Auto Complete, Python Reporting & more features have been added. Testing one-liners in the console is a good way to learn the Python API.

By pressing ⇧ ShiftF4 in any Blender Editor Type (3D View, Timeline etc.,) you can change it to a Console Editor.

From the screen shot above, you will notice that apart from the usual hot keys that are used to navigate, by pressing CtrlSpace you can enable Auto-complete feature.

Since Blender 2.5 uses Python 3.x, the interpreter is loaded and is ready to accept commands at the prompt >>>

First look at the Console Environment

To check what is loaded into the interpreter environment, type dir() at the prompt and execute it.

Following is a quick overview of the output

Now, type bpy. and then press CtrlSpace and you will see the Console auto-complete feature in action.

You will notice that a list of sub-modules inside of bpy appear. These modules encapsulate all that we can do with Blender Python API and are very powerful tools.

Notice the green output above the prompt where you enabled auto-completion. What you see is the result of auto completion listing. In the above listing all are module attribute names, but if you see any name end with '(', then that is a function.

We will make use of this a lot to help our learning the API faster. Now that you got a hang of this, lets proceed to investigate some of modules in bpy.

Before tinkering with the modules..

If you look at the 3D Viewport in the default Blender scene, you will notice 3 objects: Cube, Lamp and Camera. 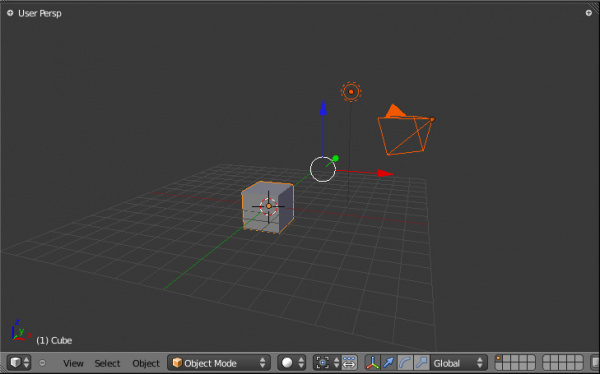 For all the scenarios listed above (not all were listed, mind you..) the bpy module provides functionality to access and modify data.

Note
For the commands below to show the proper output, make sure you have selected object(s) in the 3D view. 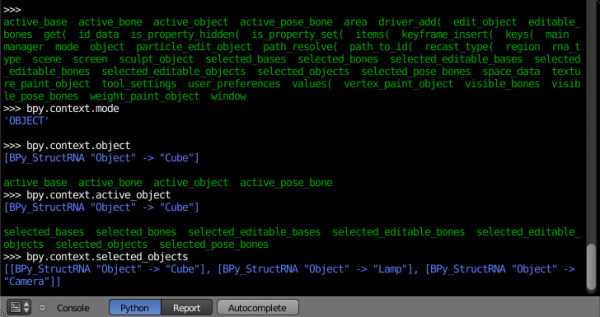 bpy.context.object or bpy.context.active_object
Will give access to the active object in the 3D View

bpy.data has a bunch of functions and variables that give you access to all the data in the Blender file.

You can access following data in the current Blender file:

That's a lot of data. 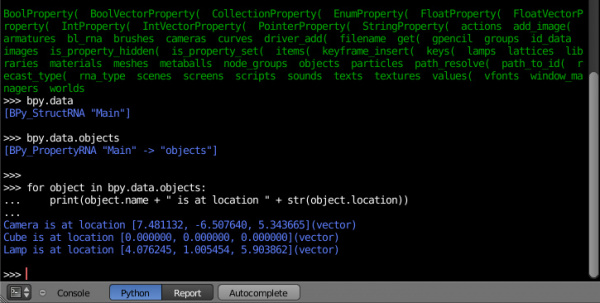 The tool/action system in Blender 2.5 is built around the concept of operators. These operators can be called directly from console or can be executed by click of a button or packaged in a python script. Very powerful they are..

Lets create a set of five Cubes in the 3D Viewport. First, delete the existing Cube object by selecting it and pressing X

The following commands are used to specify that the objects are created in layer 1. So first we define an array variable for later reference:

Now in a for loop, we create the five objects like this (In the screenshot above, I used another method) Press ENTER-KEY twice after entering the command at the shell prompt. 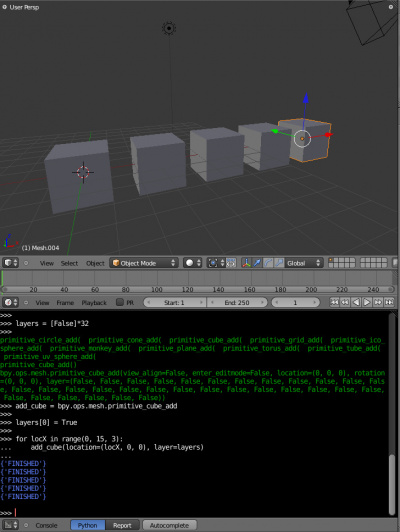