Blender's ocean simulation tools take the form of a modifier, to simulate and generate a deforming ocean surface, and associated texture, used to render the simulation data. Ported from the open source Houdini Ocean Toolkit, it is intended to simulate deep ocean waves and foam.

The simulator itself uses FFT methods to generate 2d grids of sim information internally, very similar to 2d texture maps. The simulator can generate three types of data - displacement, normals, and extra data that is used to calculate wave crest intersections (i.e. foam). After simulation, these maps are used to displace the ocean surface geometry in 3d, and also can be used for shading via the Ocean texture. The internal simulation engine is multithreaded with OpenMP to take advantage of multiple cores. 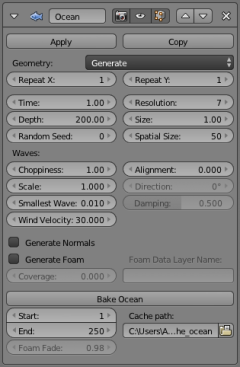 The Ocean Modifier is the main place in Blender where the simulation is performed - the modifier stores the simulation data, and applies it to create a deformed ocean surface mesh. The ocean modifier can also add a vertex color channel, in order to visualize a foam map.

Geometry
The ocean modifier can affect mesh geometry by:

When generating a mesh surface, the existing mesh object is completely overridden with the ocean grid. A UV channel is also added, mapping the [0.0,1.0] UV space to the simulation grid.

Repeat X, Repeat Y
When generating a mesh surface, controls the number of times the grid is tiled in X and Y directions. UVs for these tiled mesh areas continue outside of the [0,1] UV space.

Time
The time at which the ocean surface is being evaluated. To make an animated ocean, you will need to insert keyframes (RMB

Spatial Size
The width of the ocean surface area being simulated, in meters. This also determines the size of the generated mesh, or the displaced area, in Blender units. Of course you can scale the object with ocean modifier in object mode to tweak the apparent size in your scene.

Scale
An overall scale control for the amplitude of the waves. It approximates the height or depth of the waves above or below zero. Rather than just scaling the ocean object in Z, it scales all aspects of the simulation, displacement in X and Y, and corresponding foam and normals too.

Alignment
The directionality of the wave shapes due to wind. At a value of 0, the wind and waves are randomly, uniformly oriented. With higher Alignment values, the wind is blowing in a more constant direction, making the waves appear more compressed and aligned to a single direction.

Direction
When using Alignment, the direction in degrees that the waves are aligned to. 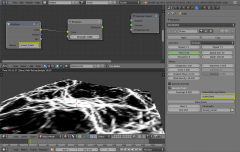 By default, the simulator only generates displacement data, since it takes the least amount of work and gives the fastest feedback. Additional sim data can be generated for rendering as well.

Generate Normals
Simulates additional normal map data. This can be used by the Ocean texture, when mapped to Normals, as a bump map, and enables generating normal map image sequences when baking.

Generate Foam
Simulates additional foam data. This can be retrieved by the Ocean texture for use in texturing (perhaps as a mask), and enables generating foam map image sequences when baking.

Foam Data Layer Name
Optional name for the vertex data layer, used by the Ocean modifier to store foam maps as vertex colors. This is required for accessing the foam data in the renderer.

Rather than simulating the ocean data live, the ocean data can be baked to disk. When a simulation is baked, the simulator engine is completely bypassed, and the modifier/texture retrieves all information from the baked files.

Baking can be advantageous for a few reasons:

Sim data is stored in disk as sequences of OpenEXR image maps, one for each of displacement, normal and foam (if enabled to be generated). Upon loading the data from these baked files, when a frame of the bake sequence is read from disk, it is cached in memory. This means that accessing loaded frames subsequent times is fast, not incurring the overhead of disk access.

Since these baked files are plain OpenEXRs, they can also be opened and rendered in any other application or renderer that supports them.

Baking also provides improved foam capabilities. When simulating live, the ocean simulator retrieves data for that current frame only. In the case of the foam map, this represents the tips of wave crests for that given frame. In reality, after foam is created by wave interactions, it remains sitting on the top of the wave surface for a while, as it dissipates. With baking, it's possible to approximate that behaviour, by accumulating foam from previous frames, leaving it remaining on the surface.

Start, End
Frames of the simulation to bake (inclusive). The start and end frames of the bake are repeated when accessing frames outside the baked range.

Cache Path
Folder to store the baked EXR files in. The sequences will be in the form disp_####.exr, normal_####.exr, and foam_####.exr where #### is the four digit frame number. If the cache path folder does not exist, it will be created.

Simulated and baked to image maps in Blender, rendered in 3Delight.

The core simulator was developed by Drew Whitehouse, for the Houdini Ocean Toolkit. This was ported to C by Hamed Zaghaghi and integrated in a patch for the Blender 2.4 series, sponsored by ProMotion Studios/Red Cartel during production of the short film Lighthouse.

In this work, Matt Ebb re-integrated the core simulator for Blender 2.5, and added additional functionality, fixes, and optimisations, sponsored by the 'Save the Ocean Sim' project.