What is this extension for?

In order to switch active cameras in a blender scene, you need to:

To insert a 'cut' point in the timeline to cut to that camera in recording:

The marker will be named by its frame number, F_42, for instance.

This is extremely clumsy for scenes which switch cameras a lot. This addon introduces a much easier workflow. It also allows switching between custom views of an object much easier.

How to install it:

How to use this addon: 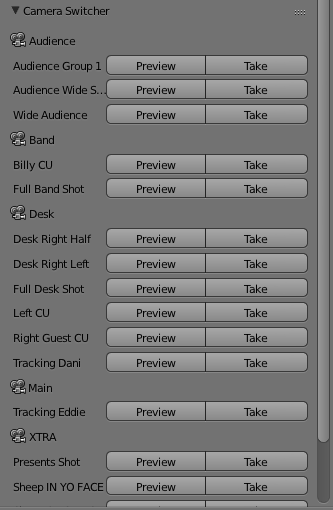 In the 3D view, open the Tool Shelf. (t) A new panel 'Camera Switcher' should be there. It lists all the available cameras, with Preview (to view the scene from that camera) and Take to insert a marker in the timeline which cuts to that camera (and is named after that camera).

The Take buttons can be used while the scene is actually playing, to 'live switch' through a scene.

Sometimes it's useful to be able to sort cameras, group them, or not display them in the switcher. For this, there is a new panel in the Camera Data Properties window, which allows you to set a sort-prefix, and toggle whether or not the camera should be shown in the switcher. In the switcher itself, there is a checkbox to allow you to group the cameras by prefix (up until the first '_' (underscore)), for instance you can set the prefix of a bunch of cameras to: "Closeup_01", "Wide Angle B", "Closeup_02", "Closeup_03", "Wide Angle_A", etc. It will group them by "Closeup" and "Wide Angle", and sort them within those groups by 01,02,03 or A, B.