Note: Here I will assume that Action mouse button is LMB

and Select mouse button is RMB

. But if your setup is different, the script will use it.

. Changes will be confirmed when you release the button. If view is locked to cursor, the lock will be disabled for the duration of the operation.

Press F10 (or the custom key you assigned to addon in user preferences) to launch the operator without touching the mouse. You can also press this key during cursor dragging to enter "mouse-free mode". In that case, changes to cursor position would be confirmed on the next F10 or LMB

Note that in Sculpt or Paint mode the operator will not be invoked by mousepress.

To discard changes in cursor position, press Esc or RMB

In cursor positioning mode, cursor coordinates are displayed at the left side of 3D view header. At the right side are displayed, from left to right:

If "Manipulate object centers only" mode is on, pivot (and, in some cases, snap element) will have dark-yellow color.

The precision, with which cursor coordinates are displayed, can be controlled by PageUp and PageDown.

You can enter exact coordinates for any of the XYZ axes; they override any constraints and positioning made with mouse. Any valid basic numeric expressions are accepted. Entered values are displayed in blue color; invalid input has brown color. Otherwise, a coordinate will have black color.

Current input position is indicated by the caret (orange vertical line). To switch to next/previous axis, press ↓ or ↑ accordingly.

You can copy, cut and paste currently displayed cursor coordinates.

To select coordinate system, press one of the following:

To set pivot mode, press one of the following:

If you hold Ctrl when selecting pivot, cursor will be snapped to pivot position.

Also, you can toggle "Manipulate object centers only" option by pressing T. If this mode is enabled, cursor will be snapped to object centers instead of faces/edges/vertices/bounding boxes.

You can switch between moving, rotating and scaling the cursor position by pressing G, R and S accordingly.

Snapping can be enabled by "Snap during transform" option. Also, while dragging the cursor, you can toggle it by holding Ctrl key. If "Cursor Depth" option is enabled (Interface tab in the User Preferences), cursor will always snap to faces unless a different snapping option is explicitly enabled.

You can change type of snapping during the operation by pressing the corresponding key.

When snap element is any other than Increment (or current coordinate system is Surface), the normal and tangentials of the element are displayed. Normal of edge or face can be optionally interpolated between normals of the corresponding vertices. 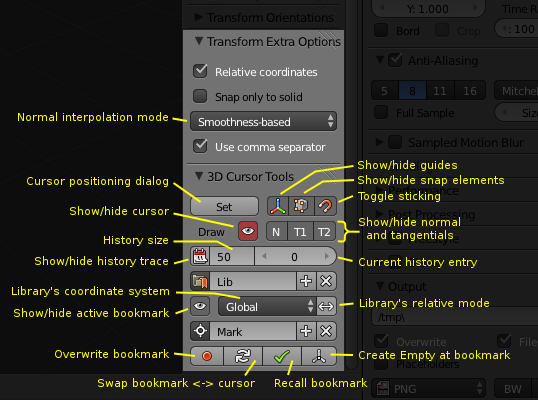 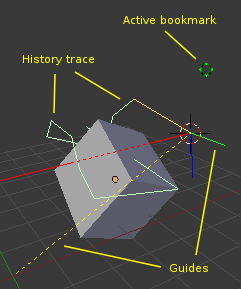 You can save the cursor locations you want to use later in bookmarks. Bookmarks themselves are stored in bookmark libraries, which is convenient if you want to logically separate bookmarked positions or to store them in different coordinate systems.

If there are no bookmark libraries (a), you can create one by pressing "New Library" button; the library can be renamed after creation. When at least one library is present (b), you can delete it ("X" button), add a new one ("+" button) and select another library (using the icon to the right of the library name). You can add, select, rename and delete bookmarks in a library in a similar way.