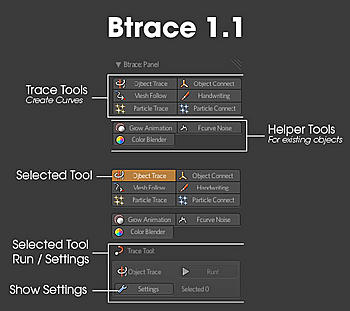 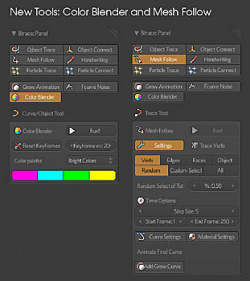 Currently Btrace is now part of the Addons_contrib which get included in all graphicall.org build (but not the release yet). So the plugin is updated via the blender SVN

The purpose of this script is to add tools that are similar to C4D Tracer. These type of tools will come in particularly handy for motion graphic artists.

The six main tools (Object Trace, Object Connect, Mesh Follow, Handwriting, Particle Trace, Particle Connect) all share common settings for the most part. Each tool creates a curve as the end result. The settings for the curve created can be setup under the Curves Settings button.

The tools have access to a few other features. All of them have access to the grow curve animation tool which animates the curve radius. As well as the Color Blender tool.

A quick explanation: Brush Trace: Creates a curve by joining points of a mesh in a continuous manner or by all edges. Options to modulate the curves radius or add distortion to mesh before converting.

Mesh Follow: Creates curve from animated mesh object. Following the path of either the verts, edges or faces, and also the option to follow the object's center point.

Handwriting Tool: And updated version of the Handwriting tool from liero and Meta-Androcto, creates an animated curve using the grease pencil. Grow Curve Animation: Animate the radius of a curve over time. Can be run alone on a curve object, or run with the tools above. F-Curve Noise: Quick link to add a F-Curve modifier to an object.

Each script has a number of different options which can be used to create some very interesting effects. The video above explains eachl, but highly encourage you to play around with them. These are Grow Animation, Color Blender and F-Curve Noise.

A lot of these scripts are based off the work from liero and included with his permission, who I have to give most the credit for the logic behind some of the tools. Liero, you rule and thank you. Also a lot of thanks to Mackraken who gave me a lot of great advice. Meta-Androcto and Atom have also given great feedback and help when needed. 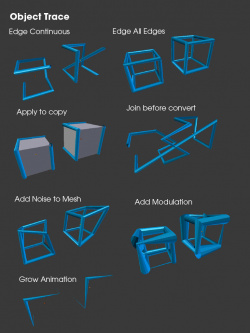