This script aims to read folders that contain blend files, display the content in a list of elements that may be imported. Useful to save custom node setups, materials or objects that will be reuse in other files.

The folders of the blend files are stored either in the addon preferences or in the settings tab of the tool shelf.

Folder paths are available for:

The paths set in addon preferences are accessible in every files and can be set once.

The paths can also be set in the Settings tab of the Tool Shelf. This can be save with the blend file. The paths set in the addon preferences can still be used if the Use custom paths checkbox is off. 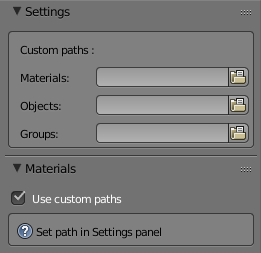 The Tool Shelf of the 3D view gives access to the library for:

The Tool Shelf of the Node Editor gives access to the library for: