This script imports GIMP .xcf or .xjt files and converts each layer into planes, mantaining their size, location and z-stacking sequence in order to reproduce the layout and appearance of the original 2D file in Blender's 3D view. The script also places the objects in blender layers and allows to define arbitrary layer grouping using naming conventions. Another important feature of this script is the possibility of reproducing the original layer compositing in Blender's compositor. Using this feature, the script will read each XCF layer's blending mode and will attempt to re-create the compositing using mix nodes, creating the complete nodetree automatically. Most of GIMP's original blending modes are supported, although some of them may have a slight different behavior in Blender's compositor.

This script gets called through the File->Import Menu. 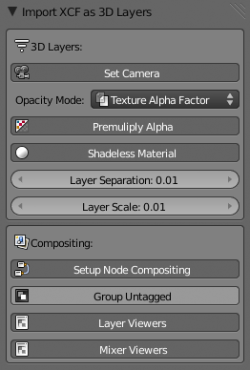 Example: layer1[background], layer2[background] as layer names in GIMP will result in layer1 and layer2 placed in RenderLayer background when imported.

TV Commercial created with the script