This script has been included in the LoopTools add-on. Further development will occur as part of that add-on, so it's highly recommended to cease using this individual Bridge script. 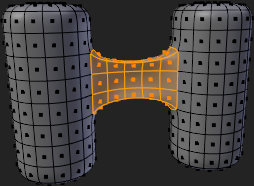 This Add-On lets you bridge two, or loft several, loops of vertices. With loops I mean selections of vertices that are connected to each other, so you aren't restricted to using closed edgeloops. After installing and enabling the Add-On you can find the functions in the Faces menu (ctrl+F in editmode). Simply select two loops, and select Bridge in the Faces menu.

This is is the only setting that is only available for the loft tool. It connects the first and the last loop to each other.

The number of faces used to bridge or loft the distance between two loops. One segment means that only faces will be created. Two (or more) segments means that an intermediary line (or lines) of vertices is created, so two or more faces can be defined between the loops. If the value is set to zero, the script automatically calculates the best amount of segments in order to keep the faces as square as possible. This is especially interesting for the loft tool, as it might create different numbers of segments between different loops.

This can be set to either cubic or linear. Linear is just a flat interpolation, while cubic tries to retain the surface tangents, resulting in more fluid curves.

The strength option is only available when the interpolation mode is set to cubic. Setting the strength to zero gives a result very similar to linear interpolation, while higher strengths result in more fluid curves. Setting a negative strength changes the direction of the curve. Or described in a more visual way: it makes deflated volumes inflate and vice versa. The soft limits of this option are set to range from -3 to +3, but you can easily assign bigger or smaller values by manually entering a number, instead of using the slider. This works just the same as with normal sliders in Blender.

When using a face-selection input (as in the image above), the inner faces will be removed after bridging or lofting. Because of some limitations in Blender the weight values assigned to the bevel-modifier might be slightly altered (by about 0.01) when this option is enabled.

Determines which vertices in both loops are connected to each other. This might be used for artistic reasons or to correct a wrong result given by the script.

This option should only be used if the script gives a wrong result. It reverses the order in which vertices are connected and can fix problems when the script gives a result that looks inverted. It's a bit hard to describe, but just try it once and you'll immediately understand what it does.