A different way to model objects by growing them. Models are pieced together from modified copies of Base Objects. Objects are given Budnodes and Footnodes. When a copy of a object is made it will be placed so it's Footnode is aligned with the Budnode of the Object it has 'grown' from. Here are some Models that have been grown:

Note, that from version 0.3.0 a Variable Propagation system has been included; The most recent version before this was introduced is v0.2.8 If you want to leave a comment or example of work using this script please add it here on the Discussion page.

The Budnode Update Properties can be modified from the Budnode Properties panel. They are used to modify the new object that grows. These may be Scale, Position, Rotation and so on.

Using Variables can make your model design more flexible and interesting. (In plants and animals this would be done chemically!). 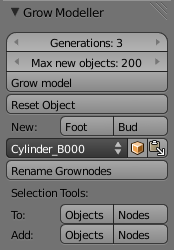 This is the main Grow Modeller tools panel. The button labelled Grow Model runs the grow modeller for chosen number of Generations. The Grow Modeller will not grow more objects per run than are chosen here as Max New Objects.

Clicking on the Reset Object button resets some values of the selected object, such as object age and whether it can grow or not. Sometimes an object won't grow because these values need resetting.

The buttons labelled Foot and Bud add new Footnode and Budnode objects to the selected object. 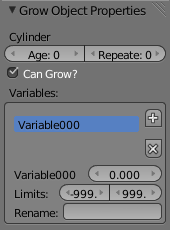 This panel is used to add variables to an object and see its general properties. Firstly the name of the selected object is displayed, here it is Cylinder. The properties Age, Repeated and Can Grow are altered automatically when the Grow Modeller is run. These can be reset using the Reset Object button on the Main Grow Modeller panel.

The box labelled Variables shows the Grow Modeller Variables an object has and their values. A variable can be added using the + button and removed with the X button. The name of a selected variable can be changed using the Rename input box. Its Value and Limits can also be set. The limits are the lower and upper ranges of the variable.

The Budnode panel controls how objects grow from the selected Budnode.

A Budnode has an Active Age range that it is allowed to grow in. It is set by default from age 0 to age 0, which means it can only grow a new object in the first generation after its creation.

Update Properties and Update Variables options are described in the sub-panels further down this page.

The box that starts Add:, is used to connect the selected Budnode to Footnodes. There are two ways to do this,

All connected Footnodes are listed under Grows to Footnodes, the list can be hidden by clicking on the eye. By altering weights associated with the connected footnodes it is possible to control which objects are most likely to grow from the selected budnode, this is done using the Grow Weights sub-panel which is described below. 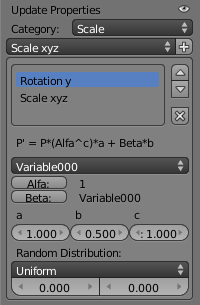 Here properties are selected that modify the new object that grows from the selected Budnode.

The Properties are selected first by Category and then by the Property Name. A Property only has an effect if it is added to the Update Properties List, this is done using the + button. It is removed with the X button.

When a new object grows from the selected Budnode, the properties in the list are applied in the order of the list. The up and down arrows are used to change that order.

The equation that is shown is to help the user make sense of how the selected property modifies the new object. The P′ represents the new property value and P the old value from the Budnodes object. Alfa and Beta represent Grow Object Variables and are selected using the drop-down menu and the Alfa and Beta Buttons. The constants a, b and c can also be changed in the panel.

This part of the Budnode panel is used to control how the Grow Object Variables are modified when propagated to the new object.

Variables are Updated in the order of the Budnode's Update Variables List which is shown on this panel. Variables can be added from the drop down menu using the + button and removed using the X button.

Like the Update Properties panel, there is an equation shown to represent the new value of the selected variable. Clicking on the eye, will automatically do some substitutions in this help text.

New objects grow from budnodes using a roulette wheel type selection. The weights for that selection are modified here.

It is often important that objects are unlikely to grow (a tree doesn't branch at every opportunity) and this is what the Don't Grow Weight is for.

When the New Object is made from the same Base Object as the Current Object, i.e. an object grows to the same object, its Repeated value increases in the New Object. The first Grow Weight value affects the likelihood that an object will grow until its Repeated value is larger than the Object Can Repeat value set here. After this a new object grows using the second Grow Weight value.

Each Generation an object can grow from a Budnode more than once by setting the number of grow attempts. This would be like spinning the roulette wheel more than once.

The Development Roadmap, Issues, Features to be added and Ideas can be found on the Development page. There is also a separate Release log page.