Since version 2.6, the rendering system must be enabled in the user preferences, User Preferences-> Addons.

On a same machine start a master server.

At startup, the master will also present a web interface that provided more information on slave machines and monitors.There are currently two web interfaces. The former can be accessed using the URL following http [s] :/ / master_ip_address:master_port. The new is based on the jquerty and development can be accessed the URL following url scheme http [s] :/ / master_ip_address:master_port/html/newui. All information regarding the new interface is located in the following link here.

It is possible to run Master, Client and slave on one System.

The option --addons netrender ensures that the network render addon is loaded. The options -noaudio -nojoystick are optional. They're only there to prevent some warnings.

Full multilayer render results are used, so the final results should be exactly the same as a local render. You don't have to specify this as the output in the original file; it's done on the slaves automatically.

Testers are invited to contact theeth via IRC (#blendercoders) or by email.

NetRender as a Render Engine

The Render Engine drop-down is located in the Info window at the top of the Blender window. This is where you select Network Render to access NetRender features. 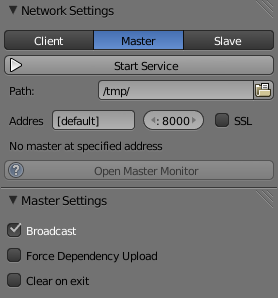 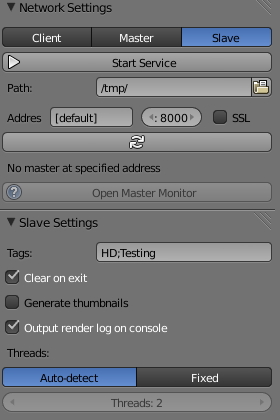 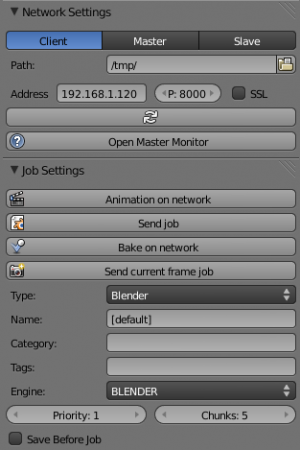 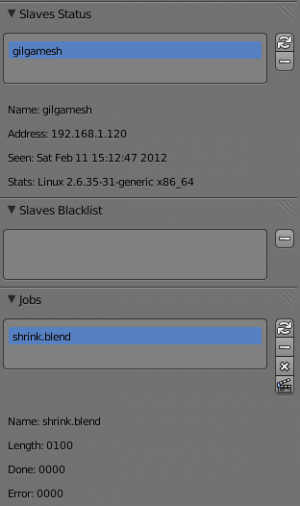 Physics baking is a recently added feature in Netrender. It supports dispatching baking jobs for each point cache used in a scene (on a modifier or particle system).

Each point cache is baked individually on a slave; bake ordering and dependencies are not currently supported.

Results can only be downloaded as a zip file from the job's page on the web interface. You then have to unzip it and put the results in the blendcache folder associated with your file and turn on disk cache for modifiers and particle systems that you baked (this step should be done automatically at some point).

The text outputted when baking a point cache is not terribly well-suited for being piped to a log and not very informative, so you won't get a whole lot of information from the job's log file. Changing this would require some change to the baking code directly.

Baking other type of physics (like fluids) should eventually be supported. 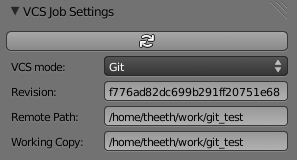 Using VCS (version control system) as a job type enables you to bypass the usual dependency system used by netrender and rely on a versioning system instead. For more organized productions, this is usually a good idea as it minimizes dependency errors, disk space used and job dispatch time.

Currently, the only two version control systems supported are Subversion (svn) and Git. Adding new ones is relatively easy and will be done when requested.

After selecting a VCS, you have to specify three system-specific settings:

The Refresh button will try to guess those settings to the best of its knowledge.

Yes, I know the current workflow is far from being ideal, especially from a professional render farm point of view. I expect Matt to whip me and suggest better stuff. Optimally, I'd like if users could just press "Anim on network", it would automatically dispatch to the network and wait for results, like a local render. All "pro" features should be optional.

Primary balancing is performed by calculating usage of the cluster every 10s for each job, averaged over time. The next job dispatched is the one with lowest usage (the one that is using the least number of slaves). The priority of a job acts as a divisor, so a job of priority 2 would use a percentage of the cluster as if it were 2 jobs and not just one (i.e.: a job of priority 1 and one of priority 2 sharing slaves will use respectively 33% and 66% of the processing power). On top of that, there's a set of exceptions and first priority rules:

Out of date, read the code and put info here.

This is a list of blender code I would need to make netrender better. Some of them are bugs, some are features that should (hopefully) eventually be there.