Rigify helps automate the creation of character rigs. It is based around a building-blocks approach, where you build complete rigs out of smaller rig parts (e.g. arms, legs, spines, fingers...). The rig parts are currently few in number, but as more rig parts are added to Rigify it should become more and more capable of rigging a large variety of characters and creatures.

Rigify also operates on the principle that once a rig is created, that rig should no longer need Rigify. This means you can always distribute rigs created with Rigify to people who do not have it and the rigs will still function completely.

It is important to note that Rigify only automates the creation of the rig controls and bones. It does not attach the rig to a mesh, so you still have to do skinning etc. yourself.

MODULAR RIGGING
Rigify build blocks can be mixed together to rig any character you want. If you need to build a character with 5 arms and 1 leg rigify can handle it for you creating all the required complex controls system (FK, IK, and all the relative snapping tools and the UI) in few seconds.

NON DISRUPTIVE RE-RIG
If the generated rig doesn’t fit all the features you need or, for example, you decide to add something more to your character (like a 6th arm or a tail), you can re-generate your rig without losing your previously generated features and your animation data.

ADVANCED AND FLEXIBLE FEATURESET FOR CHARACTER ANIMATION
The included rig samples (limbs, spines, tails, fingers, faces…) adds to all the stretchy FK/IK features a direct deformation secondary layer that lets you flex, bend and deform the character as you like through interactive bendy-bones controls.

SHAREABLE ANIMATION THROUGH ALL RIGIFY RIGS
Since the control system is generated by rigify, if you share a metarig through different characters you will be able to share data between them even if they have different proportions.

EXTENDABLE FEATURESET
You can save and encode your meta-rigs to a button to have them available at any time without re-creating it by hand or share your meta-rigs with other people. Through python you can also teach rigify how to create new rigify-types or new rig samples.

READY TO GO
Once you generate your rig you won’t need rigify or any other addon to use it. 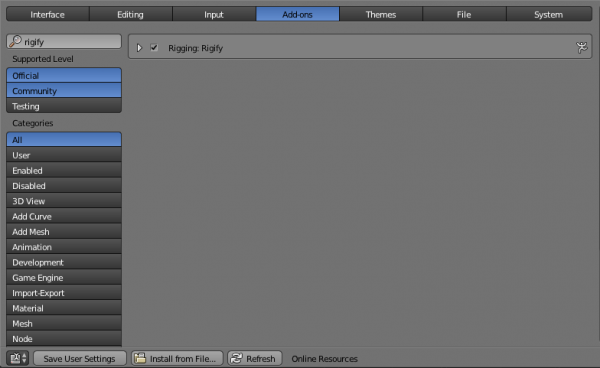 The precompiled meta-rigs can be found in the Add menu. 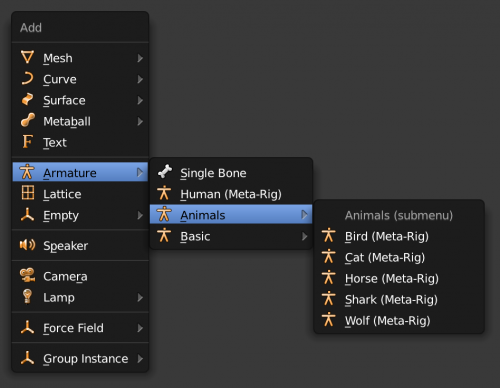 To correctly match your character, meta-rig bones must be moved to correct positions. This can be achieved in 2 different ways: pose-mode or edit-mode.

Enter the meta-rig pose-mode. Rotate, scale, and translate the bones in the correct position. When bones are in correct positions - always staying in pose mode - use ControlA  »  Apply » Apply Pose As Rest Pose.

Some basic armature display setup is suggested before entering bone edit mode.
With the meta-rig selected, go in the Properties Window and click on the Object tab. scroll down to the display dropdown and enable X-ray and under “maximum draw type” drop-down menu select “Wire”. This way the bones will always be drawn in wireframe on top of your geometry. 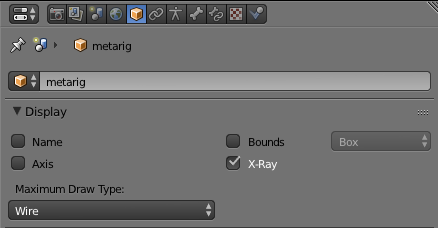 Then, always in the properties window click on the Armatures tab and under display check the Axis checkbox. This way you the bones rotation axes will be displayed during the edit process. 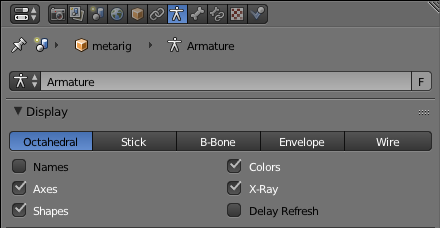 Start by identifying basic face landmarks to follow as guide for bones placement. 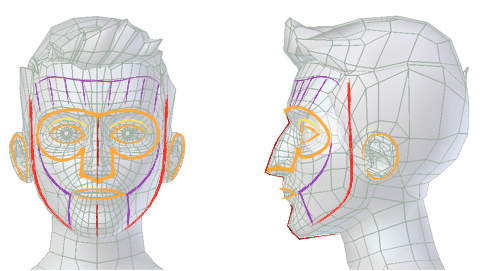 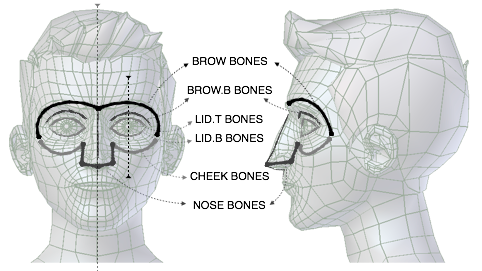 The eyes-nose loop area is split in different parts identified by bone names. Follow the image to place the bones. 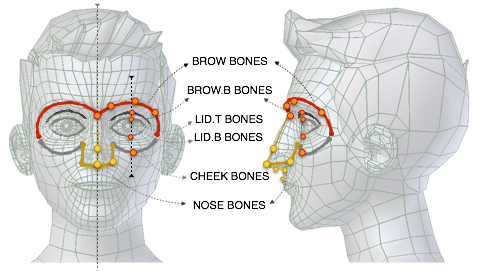 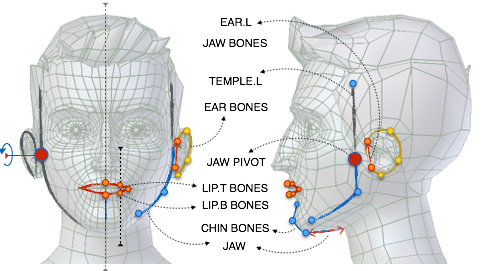 Also the jaw-ear area is split in different parts identified by bone names. Follow the image to place the bones. 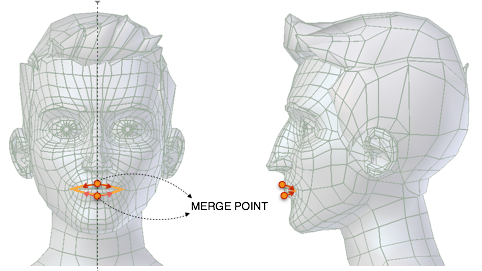 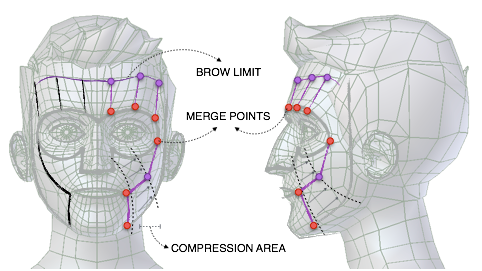 After the main face bones are placed use the cheek bone to connect the eye-nose area to the jaw mouth area. Then do the same with the brow area. This process will automatically define face muscles compression areas.

Position the eye bones in the eye pivot point facing right toward the face on the Y axis. 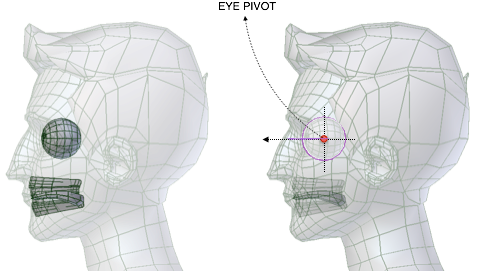 finally position the teeth bones on your teeth geometries and the tongue bone chain as described in the figure. 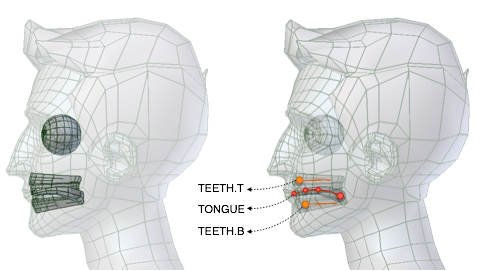 Before generating the rig ensure the face master bone is facing upward.

Start by identifying on your character basic torso zones to follow as guide for bones placement.

Head, Chest and Pelvis are rigid zones, so they require less bones. Having a good edge loop placement around zone boundaries on your model will help in having correct deformation after armature binding. 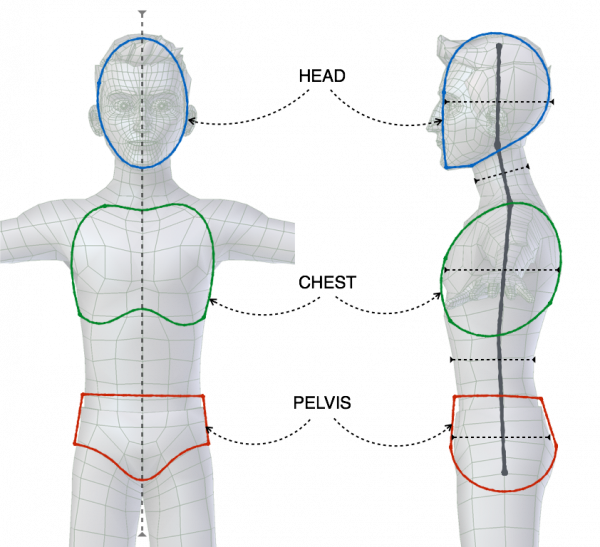 Starting from the side view 3 NumPad, place the main spine bones trying to use one bone for the rigid areas and 2 for the flexible ones. In addition to the main spine, the torso is provided with additional pelvis bones (to oppose the leg bending), two breast controls and two shoulder bones. Even if the pelvis bones will not appear in the final rig as controls, they will contribute to deformation. 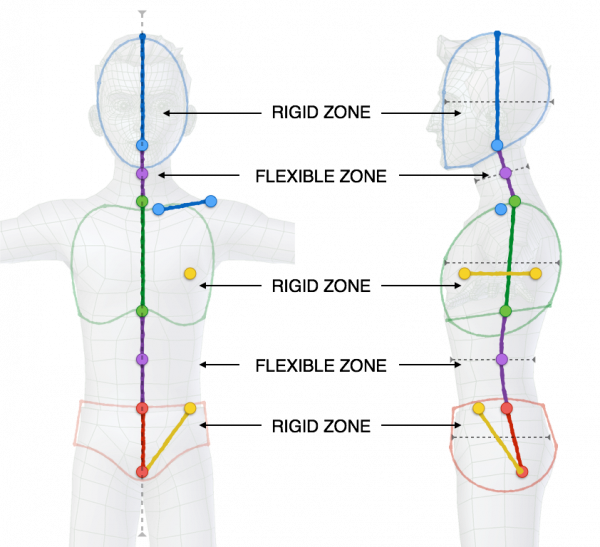 While placing the arm bones try to start having a straight line that goes from the shoulder to the hand in both front and top view. After this is done just add a slight bend to the elbow. This can be easily done by going in the top view 7 NumPad, entering armature edit mode and sliding the bone junction between forearm and upper_arm slightly toward the world’s Y axis. 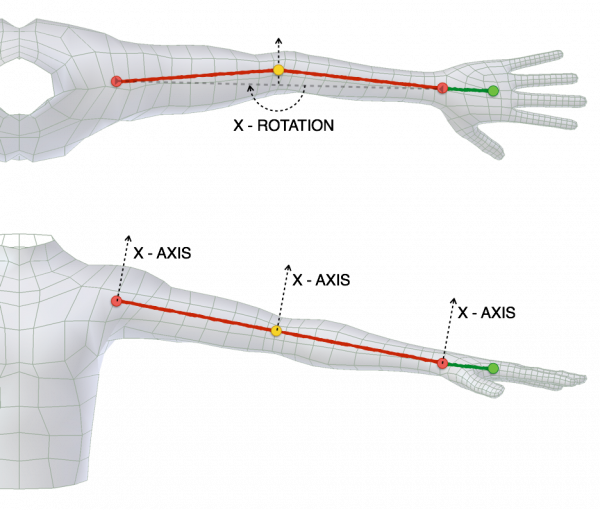 For the leg you can follow a similar process. Start by aligning the leg bones creating a straight line from the hips to the ankle, then place the foot and the toe accordingly. Remember to add a slight bend to the knee. This can be easily done by going in the side view 3 NumPad, entering armature edit mode and sliding the bone junction between thigh and shin slightly toward the world’s Y axis. 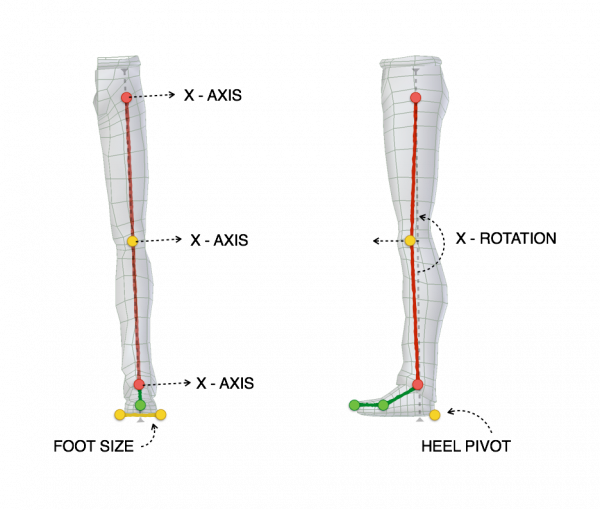 Finally align the heel bone by going in the front view 1 NumPad and placing his head and tail to fill the foot size from side to side then, in the side view 3 NumPad, align the bone at the point where the heel just touches the ground floor.

Start by placing, finger by finger, all the knocks in place. 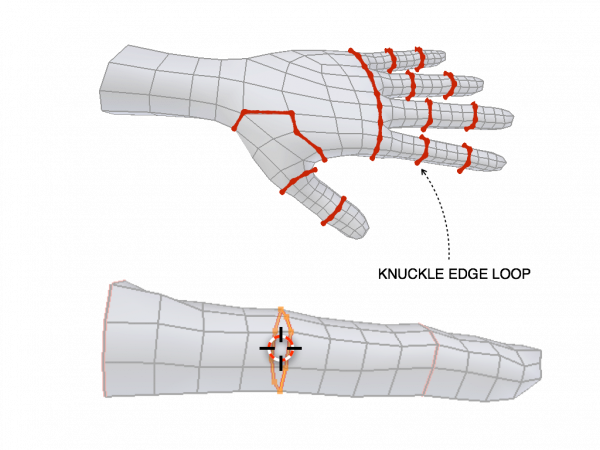 finalize the positioning by taking care of bone rolls (the x axis is set as bend axis). 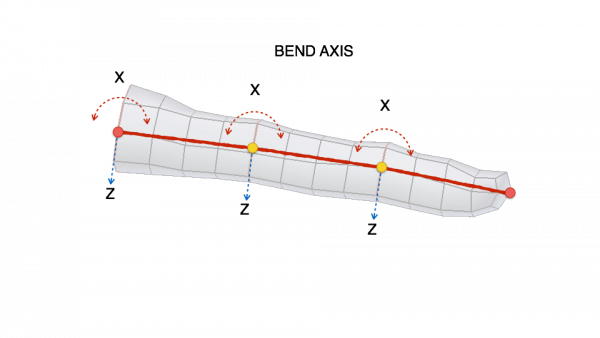 When the fingers are in place proceed placing the palm bones. 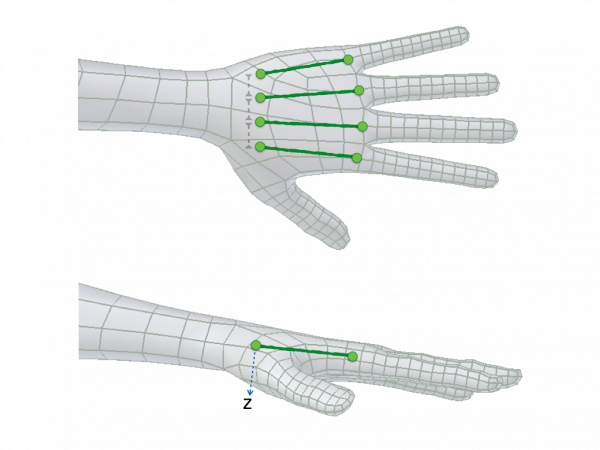 With the bones in the correct positions, jump back in object mode, go to the armature tab, scroll down to the bottom and click on the “Generate” button to finalize the rig creation. The generation process will take from few seconds to one minute depending on rig complexity and hardware specs of your machine. If the generated rig needs tweaking you can modify the metarig accordingly and then click again on the generate button. If the rig already exists, rigify will simply overwrite it retaining all your modifiers and constraints and - where possible - all the previously generated features.

If you need to generate more than one rig in the scene or update a specific one (when there are more than one in the same file) follow the instructions in the Advanced Rig Generation section.

Binding the geometries to the rig

To bind the geometries to the rig you can use your preferred tools. Just few things you have to know:

After human rig generation a new armature named “Rig” will be added to your scene. This is the character rig you have generated from the human metarig and will contain all the features.

Each limb will have a gear widget at his base. This is the utility bone that contains all the sub-rig properties. The rig features will be displayed anyway when the affected bone is selected but if you are looking in the graph editor for those properties’ animated values, this is most likely the bone to look at. Rigify’s Super Limb will list the following features: 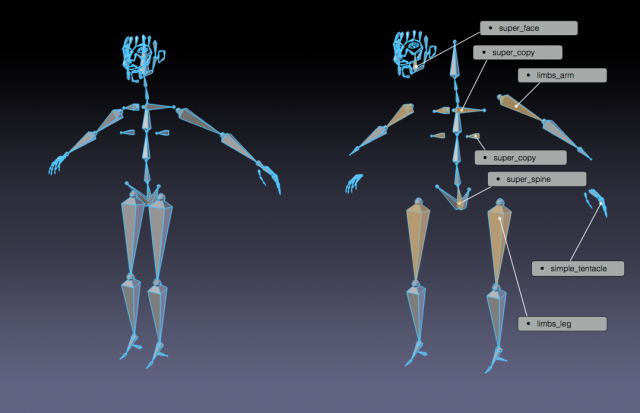 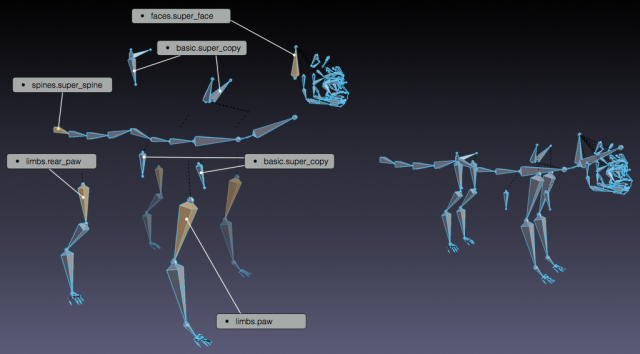 Rig Types are the Properties Collection used by Rigify to identify what kind of rig the user is building.

The currently available Rig Types are: 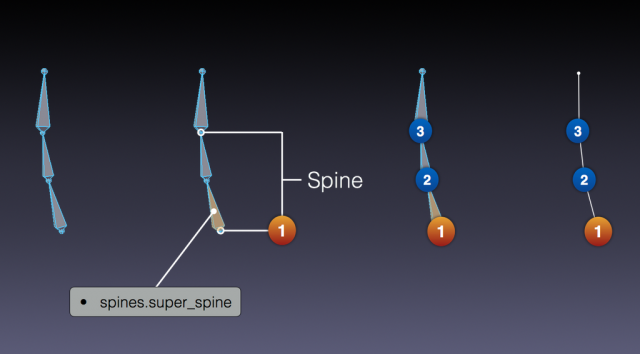 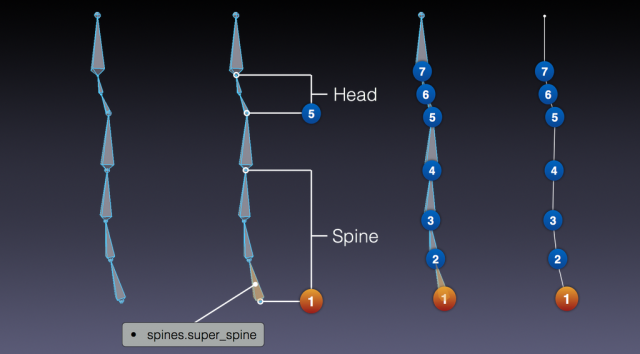 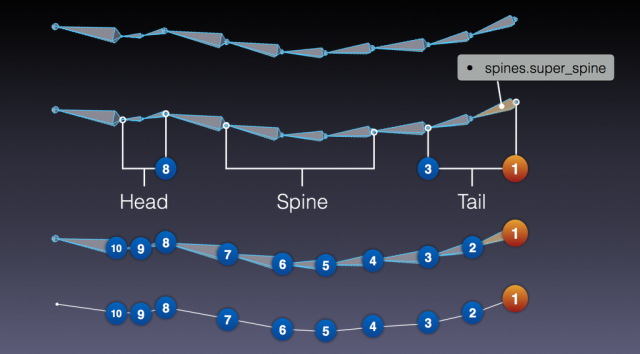 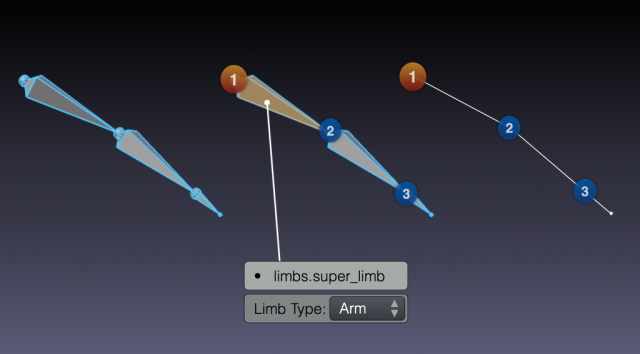 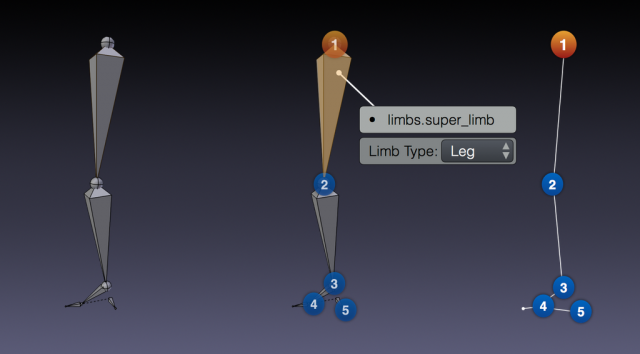 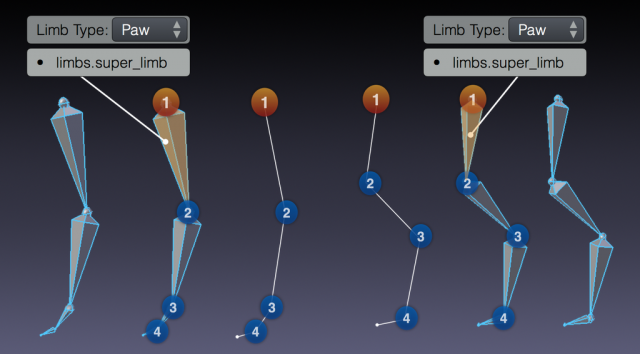 Rig samples are just pre-built bone-chains with corresponding Rig-Type assigned to the first bone of the chain. The currently available Rig Samples are:

building your own metarig from scratch requires an armature object to work with. Just add a single bone from the Add Menu.

Now that there is an armature object to work - with the armature selected - enter armature edit mode. Building a metarig from scratch in edit mode can be done in two ways:

Adding samples in edit mode is a good way to start building a meta-rig. This way you can become familiar with the available building blocks and how they are meant to be used. To add a rig sample:

Armature Layers are usually used to isolate bones. Rigify can take advantage of armature layer to generate extra features and the user interface for the final rig. Blender 2.79 can handle 32 separate layers for each armature. The armature layers are visualized under the armature tab. They are split in two separate groups of 16: the top row contains layers from 1 to 8 and from 9 to 16. The bottom row layers form 17 to 24 and form 25 to 32.

Rigify Layers are displayed in a vertical layout inside their own separate panel named Rigify Layer Names.

Rigify Bone Groups are used to define bone colors on the final rig. The top two rows of the Rigify Bone Groups panel are used to define the bone colors general behavior. Usually color themes use a gradient of colors to define the different bone states: default, selected and active. When multiple color themes are used in the same rig, identifying which bone is selected or active can be tricky since each color will have its corresponding state.

To override this behavior Rigify Bone Groups unifies the active and selected states with the same color. This is defined by two values: 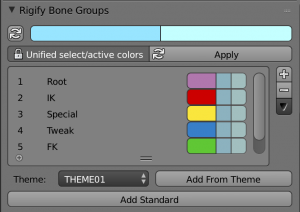 To add a specific Theme with its own color scheme, select it from the list and click on the Add From Theme button.

When Advanced Options are enabled, user will be able to:

Advanced Rig Generation Options are locked by default. Click on the "Advanced Options" button to enable. With Advanced Options enabled the panel will be updated displaying two main modes:

By default overwrite is selected. At this stage if you don't touch anything in the UI the generate function will be invoked as is, meaning in fact that generating the rig now will create a new rig from the metarig if none is present in the scene, or overwrite the default one if you have already generated a rig from a metarig. For further information about the rigify generate function look at basic usage section.

The New Rig Mode will let the user generate a new rig from the metarig regardless an already generated rig is present in the scene. A specific name for the rig can be set by the user through the specific "Rig Name" text box. If no name is set, rigify will generate an armature object named "rig" and a python script named "rig_ui.py"

The Overwrite Rig Mode will let the user specify a target rig to be overwritten. If none is set rigify will search and eventually overwrite an armature object named "rig" and a python script named "rig_ui.py"

When linking a rig into another file, you generally want to create a group that includes the generated rig, the character mesh, and the "WGT-" objects. You do not need to include the metarig. You then link in the group, make a group instance, and make the rig proxy.

You also need to separately link in the rig_ui.py text block. Otherwise the rig UI will not appear in the n-panel. 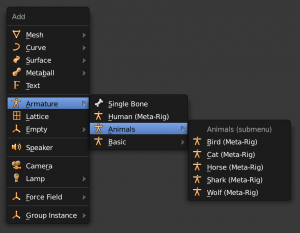