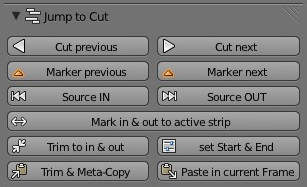 The timeline cursor jumps from edit point to edit point. Edit point is any point of entry or departure of a clip, or the cutting start and end. If you could be assigned as shortcut keys "cursor up" and "cursor down" these functions, you would have a similar behavior to other NLE, but those two keys are predefined by blender to jump to keyframes forward and backward ... It really works well for me assigning keys Q and W.

The Cut next operator detects the tail of the timeline and remains showing the last frame, not the black of the next. Be aware of this when you set up the end frame.

As you can guess, jump from marker to marker.

Source IN / Source OUT:

Create a marker IN and a marker OUT where the timeline cursor are. Two specific markers that can then be used for editing.

Mark in & out to active strip:

Trim (soft cut) the selected clip on both sides to adhere to the In and Out markers, as long as the clip is within that range. If not, or in absence of In and Out, does nothing. I.E. It is a quick option to cut many clips at the same duration.

Set scene start and end frames with the same values of IN and OUT markers.

This operator makes a metastrip with all selected items, and trim them to in and out, There is not an insert edit, but also streamlines the tasks a bit ...

If there is no IN and OUT markers, the meta is not trimmed.

Paste the clipboard content aligned at the timeline cursor.

Please, comment and discuss features or bugs at this thread: