Current state of the implementation

The algorithm is ported to the Blender 2.5 code base in the 'itasc' branch. The UI is unchanged except for a solver selection button in the Bone constraint panel: 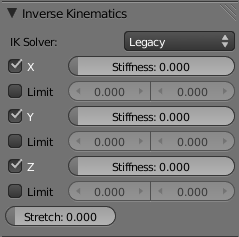 Internally, a plugin system direct the code to the old or the new solver based on user selection. The solver temporary data is stored at the bPose structure level.

The latest source code is available as part of the itasc branch. The original code is on the KUL repository and contains a lot of information in the commit logs. At some point I will convert this information into a wiki.

The solver is very fast and handles happily many constraints as long as the scene is under or fully constrained. The feedback coefficient for the constraint determines how quickly the constraints affect the armatures. A typical value is K=20s-1. This means a time constant of 50ms and a reaction type of 100-200ms. This is too fast for real robots but just ok for armatures in Blender.

The value of the timestep is a critical parameter: if too large, the linear approximation of the solver is incorrect and the armature pose oscillates around the solution. In Blender this will directly be visible as an oscillation of the pose during the animation. That's one advantage of the new solver: if you don't set the parameters right, you see it directly as an ill behavior, while the old solver would eventually iterate many times silently.

There no configuration parameter available in Blender at the moment. The solver is set to use auto substepping (see above) and the feedback coefficient is set to 20 for all constraints. Later I will add a panel where the user will be able to change those settings.

The current implementation meets the initial goal of replicating the functionality of the original solver. It is now time to move to the next level: