Proportional Edit is a way of transforming selected elements (such as vertices) while having that transformation affect other nearby elements. For example, having the movement of a single vertex cause the movement of unselected vertices within a given range. Unselected vertices that are closer to the selected vertex will move more than those farther from it (i.e. they will move proportionally relative to the location of the selected element). Since proportional editing affects the nearby geometry, it is very useful when you need to smoothly deform the surface of a dense mesh.

Menu: Via the icon in the header indicated by the yellow square in the below image.

Proportional editing is typically used in Edit mode, however, it can also be used in Object mode. In Object mode the tool works on entire objects rather than individual mesh components. In the image below, the green cube is the active Object, while the red and blue cubes are located within the proportional edit tool's radius of influence. When the green cube is moved to the right, the other two cubes follow the movement.

Menu: Mesh » Proportional Editing and via the highlighted icon in the below image

When working with dense geometry, it can become difficult to make subtle adjustments to the vertices without causing visible lumps and creases in the model’s surface. When you face situations like this the proportional editing tool can be used to smoothly deform the surface of the model. This is done by the tool's automatic modification of unselected vertices within a given range.

or PageUp/PageDown respectively. As you change the radius, the points surrounding your selection will adjust their positions accordingly. 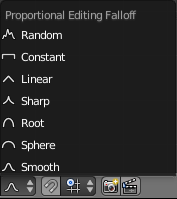 The Proportional Editing mode menu is on the 3D View header.

Disable (O or AltO)
Proportional Editing is Off, only selected vertices will be affected.

Enable (O or AltO)
Vertices other than the selected vertex are affected, within a defined radius.

Projected (2D)
Depth along the view is ignored when applying the radius. 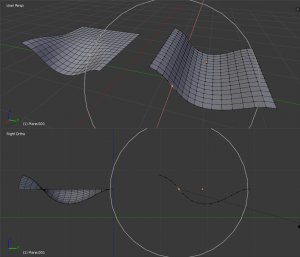 The difference between regular and Projected (2D) proportional option (right).

Connected (AltO)
Rather than using a radius only, the proportional falloff spreads via connected geometry. This means that you can proportionally edit the vertices in a finger of a hand without affecting the other fingers. While the other vertices are physically close (in 3D space), they are far away following the topological edge connections of the mesh. The icon will have a grey center when Connected is active. This mode is only available in Edit mode.

Falloff
While you are editing, you can change the curve profile used by either using the Mesh » Proportional Falloff submenu, using the toolbar icon (Falloff menu), or by pressing ⇧ ShiftO to toggle between the various options.

Switch to a front view (1 NumPad) and activate the grab tool with G. As you drag the point upwards, notice how nearby vertices are dragged along with it. When you are satisfied with the placement, click LMB

to fix the position. If you are not satisfied, cancel the operation and revert your mesh to the way it looked before with RMB

A landscape obtained via proportional editing.

Combine these techniques with vertex painting to create fantastic landscapes. The final rendered landscape image below shows the results of proportional editing after the application of textures and lighting.