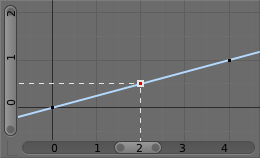 Drivers can use properties, numbers, transformations, and scripts, to control the values of properties.

So from this example, if the Driver Value is 2.0 the property will be 0.5.

The Driver Value is determined by Driver Variables or a Scripted Expression.

Most the settings for the drivers F-Curves are found in the Graph Editor.

This panel is located in the Graph Editor with the mode set to Drivers.

The drivers panel is for setting up Driver Variables or a Scripted Expression which will determine the value of the Driver Value.

Update Dependencies
This will force an update for the Driver Value dependencies.

Remove Driver
Removes the driver from the object.

Type
The type of calculation to use on the set of Driver Variables. (If you only have one driver variable there is no real difference between average, sum, minimum and maximum)

Average Value
Uses the the average value of the referenced Driver Variables.

Sum Values
Uses the the sum of the referenced Driver Variables.

You must write a python expression which performs your own calculations on the Driver Variables.

The current value of the variables or scripted expression. 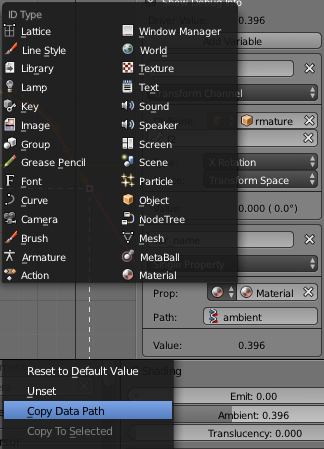 Setup of a Single Property. 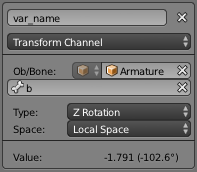 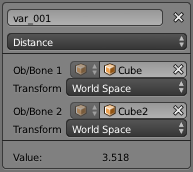 Name
Name to use for scripted expressions/functions.

No spaces or dots are allowed and must start with a letter.

Variable Type
The type of variable to use.

Single Property
Use the value from some RNA property.

For example, the Ambient shading color from a material.
First select the type of ID-block, then the ID of the ID-block, then copy and paste an RNA property (Ctrl+V).

ID
The ID of the ID-Block type, example, Material.001.

Transform Channel
Use one of the Transform channels from an object or bone.

This option is for armatures.

Rotational Difference
Use the rotational difference between two objects or bones.

Distance
Use the distance between two objects or bones.

Value
Shows the value of the variable.

To control a property with a driver, find the property you want to add driver to.

the property and select one of the following options.

Add Single Driver
This will add a single driver to the selected property.

This example shows you how rotate a cube mesh by moving another cube left or right in the 3D view.
First make sure you are in the Front Orthographic View Num1, Num5. 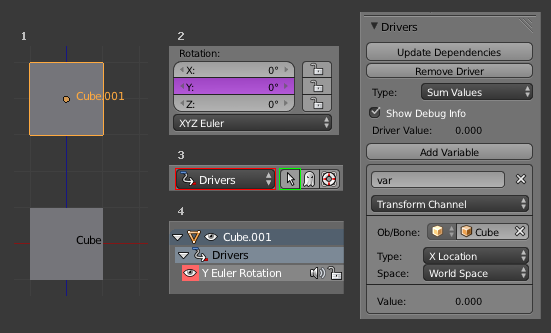 Now when you move the Cube left or right in the 3D View, Cube.001 should rotate.

Here are some examples using the scripted expression Expr to set the Driver Value. 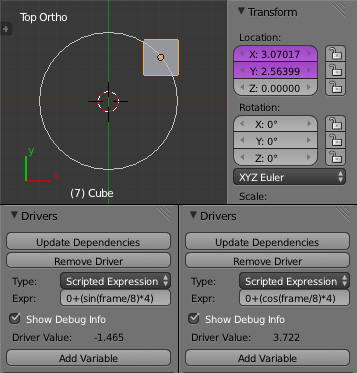 Here two drivers have been added to the Cube, X Location and Y Location.

The scripted expressions are being used to set the object location.

(frame/8): is the current frame of the animation, divided by 8 to slow the orbit down.
(sin( )*4): This returns the sine of (frame/8), then multiplies by 4 for a bigger circle.
0+: is used to control the X Location offset of the orbit.

(frame/8): is the current frame of the animation, divided by 8 to slow the orbit down.
(cos( )*4): This returns the cosine of (frame/8), then multiplies by 4 for a bigger circle.
0+: is used to control the Y Location offset of the orbit.

frame is the same as bpy.context.scene.frame_current.

There is a list of built in driver functions and properties.
These can be displayed via the python console.

This script will add a function to the driver namespace, which can then be used in the expression driverFunc(frame).

This example is a Shape Key Driver. The driver was added to the shape key Value. 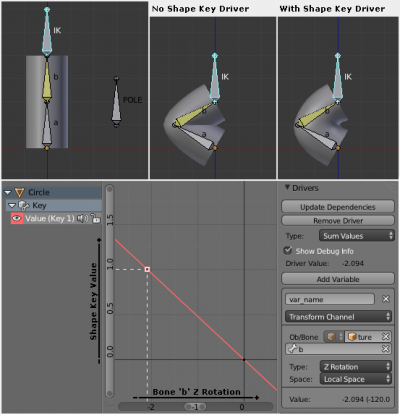 This example uses the Armature Bone 'b' Z Rotation to control the Value of a Shape Key.
The bone rotation mode is set to XYZ Euler.

This kind of driver can also be setup with the Variable Type Rotational Difference.

The following screenshots illustrate combining shape keys, bones, and drivers to make multiple chained relative shape keys sharing a single root. While it lacks the convenience of the single Evaluation Time of an absolute shape key, it allows you to have more complex relationships between your shape keys.

The value of Key1 is bound to the position of bones by a driver with two variables. Each variable uses the world Z coordinate of a bone and uses the maximum value to determine how much the base should be extended. The generator polynomial is crafted such that the top of the dominant stack should line up with the bone for that stack.

The value of Key2A is bound to the position of bone.L . Its generator parameters are crafted such that when Key1's value reaches 1, the value of Key2A starts increasing beyond zero. In this way the top of the left stack will move with bone.L (mostly).

The value of Key2B is bound to the position of bone.R . Its generator parameters are similar to Key2A so that the top of the right stack will move with bone.R (mostly).

Since it's quite easy for bone.L and bone.R to be in positions that indicate conflicting values for Key1 there will be times when the bones do not line up with the tops of their respective stacks. If the driver for Key1 were to use Average or Minimum instead of Maximum to determine the value of the shape key then "conflicts" between bone.L and bone.R would be resolved differently. You will chose according to the needs of your animation.

Some common problems people may run in to when using drivers.

By default blender will not auto run python scripts.

If using a Scripted Expression Driver Type, you will have to open the file as Trusted Source, or set Auto Run Python Scripts in User Preferences > File > Auto Execution.

Parts of the User Interface may use different units of measurements for angles, rotation. In the Graph Editor while working with Drivers, all angles are Radians.

There is a well known limitation with drivers on bones that refer to another bone in the same armature. Their values can be incorrectly calculated based on the position of the other bone as it was before you adjust the current_frame. This can lead to obvious shape glitches when the rendering of frames has a jump in the frame number (either because the .blend file is currently on a different frame number or because you're skipping already-rendered frames).