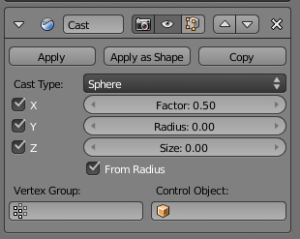 Factor
The factor to control blending between original and cast vertex positions. It’s a linear interpolation: 0.0 gives original coordinates (i.e. modifier has no effect), 1.0 casts to the target shape. Values below or above [0.0, 1.0] deform the mesh, sometimes in interesting ways.

Vertex Group
A vertex group name, to restrict the effect to the vertices in it only. This allows for selective, real-time casting, by painting vertex weights. 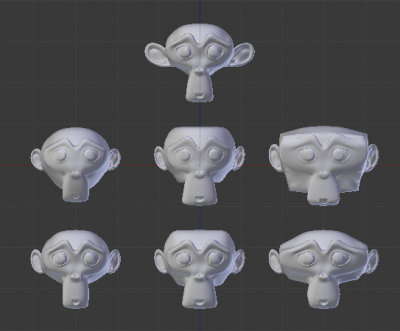 Top: Suzanne without modifiers. Middle: Suzanne with each type of Cast Modifier (Sphere, Cylinder and Cuboid). Bottom: Same as above, but now only X axis is enabled. Sample blend file