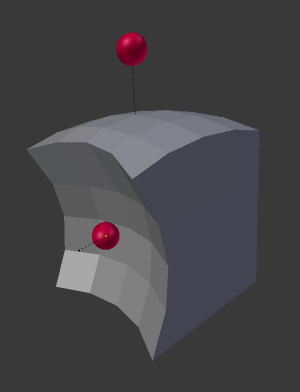 Two spheres used as Hooks to deform a subdivided cube.

The Hook modifier is used together with Shape Keys to control the deformation of a Mesh or a Lattice using another object (usually an Empty but it can be any object). 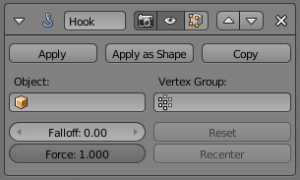 Object
The parent object name for the hook.

Falloff
If not zero, the falloff is the distance where the influence of a hook goes to zero. It uses a smooth interpolation, comparable to the proportional editing tool.

Force
Since multiple hooks can work on the same vertices, you can weight the influence of a hook this way. Weighting rules are:

The following settings are only available in Edit mode: