If you change the deflection settings for an object you have to recalculate the particle, softbody or cloth system (Free Cache), this is not done automatically. You can clear the cache for all selected objects with CtrlB → Free cache selected. 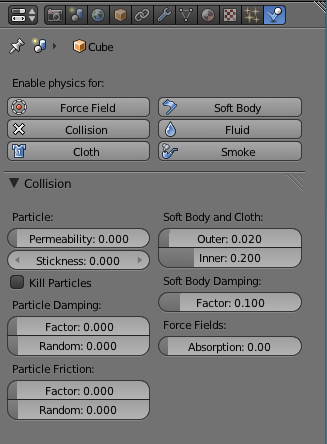 Collision panel in the Physics context.

Permeability
Fraction of particles passing through the mesh. Can be animated with Object F-curves, Perm channel.

Stickiness
How much particles stick to the object.

Damping Factor
Damping during a collision (independent of the velocity of the particles).
Random damping
Random variation of damping.

A softbody vertex colliding with a plane.

Outside and inside is defined by the face normal, depicted as blue arrow in (A softbody vertex colliding with a plane).

Damping Factor
Damping during a collision.

Softbody collisions are difficult to get perfect. If one of the objects move too fast, the soft body will penetrate the mesh. See also the section about Soft Bodies.

Absorption
A deflector can also deflect effectors. You can specify some collision/deflector objects which deflect a specific portion of the effector force using the Absorption value. 100% absorption results in no force getting through the collision/deflector object at all. If you have 3 collision object behind each other with e.g. 10%, 43% and 3%, the absorption ends up at around 50% (100×(1-0.1)×(1-0.43)×(1-0.03)). 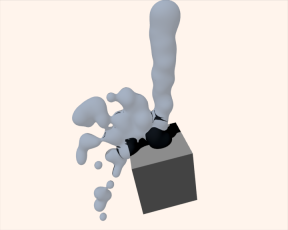 Here is a Meta object, dupliverted to a particle system emitting downwards, and deflected by a mesh cube: