Particles are lots of items emitted from mesh objects, typically in the thousands. Each particle can be a point of light or a mesh, and be joined or dynamic. They may react to many different influences and forces, and have the notion of a lifespan. Dynamic particles can represent fire, smoke, mist, and other things such as dust or magic spells.

You see particles as a Particle modifier, but all settings are done in the Particle tab. 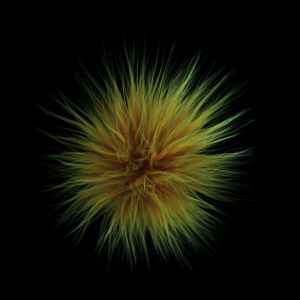 Image 1: Some fur made from particles (Blend file).

Particles generally flow out from their mesh into space. Their movement can be affected by many things, including:

Particles may be rendered as:

Every object may carry many particle systems. Each particle system may contain up to 100.000 particles. Certain particle types (Hair and Keyed) may have up to 10.000 children for each particle (children move and emit more or less like their respective parents). The size of your memory and your patience are your practical boundaries.

The process for working with standard particles is:

To add a new particle system to an object, go to the Particles tab of the object Settings editor and click the small + button. An object can have many Particle Systems.

Each particle system has separate settings attached to it. These settings can be shared among different particle systems, so one doesn't have to copy every setting manually and can use the same effect on multiple objects. Using the Random property they can be randomized to look slightly different, even when using the same settings. 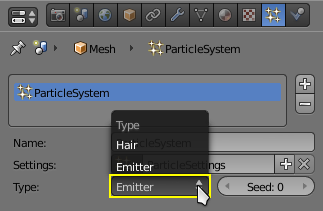 After you have created a particle system, the Property window fills with many panels and buttons. But don’t panic! There are two different types of particle systems, and you can change between these two with the Type drop-down list:

Emitter
This parallels the old system to the greatest extent. In such a system, particles are emitted from the selected object from the Start frame to the End frame and have a certain lifespan.

Hair
This system type is rendered as strands and has some very special properties: it may be edited in the 3D window in realtime and you can also animate the strands with Cloth Simulation.

The settings in the Particle System panel are partially different for each system type. For example, in Image 3 they are shown for only system type Emitter.