As surfaces are 2D, they have two interpolation axes, U (as for curves) and V. It is important to understand that you can control the interpolation rules (knot, order, resolution) independently for each of these two dimensions (the U and V fields for all these settings, of course).

You may ask yourself “but the surface appears to be 3D, why is it only 2D?”. In order to be 3D, the object needs to have “Volume,” and a surface, even when it is closed, doesn’t have volume; it is infinitely thin. If it had a volume the surface would have a thickness (its third dimension). Hence, it’s only a 2D object, and has only two interpolation dimensions or axes or coordinates (if you know a bit of math, think of non-euclidean geometry – well, surfaces are just non-euclidean 2D planes…). To take a more “real life” example, you can roll a sheet of paper to create a cylinder; well, even if it “draws” a volume, the sheet itself will remain a (nearly…) 2D object!

In fact, surfaces are very similar to the results you get when extruding a curve (by the way, I think it should be possible to convert an extruded curve to a surface, at least when only made of NURBS – but Blender cannot do it currently…). 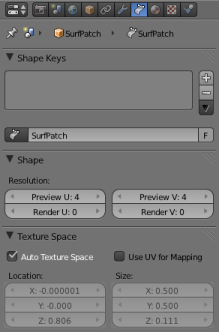 The panels of the Editing context are the same as for curves, just with fewer options… And as usual, you have the Select and Surface menus in the 3D view headers, and the Specials (W) pop-up one.

There is nearly no difference from NURBS curves, except that the U direction is indicated by yellow grid lines, and the V one is materialized by pink grid lines, as you can see in (Surface).

You can hide and reveal control points just as with curves, and you have the same draw options in the Curve Tools panel.

Many of the concepts from curves, especially NURBS ones, carry directly over to NURBS surfaces, such as control points, Order, Weight, Resolution, etc. Here we will just talk about the differences.

However, you can have “2D” surfaces made of curves (using the extrusion tools, or, to a lesser extent, the filling of closed 2D curves. And you can have “1D” curves made of surfaces, like a NURBS surface with only one row (either in U or V direction) of control points produces only a curve…

Visually you can tell which is which by entering Edit mode and looking at the 3D window’s header: either the header shows “Surface” or “Curve” as one of the menu choices. Also, you can extrude a whole NURBS surface curve to create a surface, but you can’t with a simple NURBS curve (we talk here about the “standard” Extrude tool, the one activated with the E shortcut, not the quite-specific curve extrusion tools – yes, I know, it’s not easy to follow…).

Control points for NURBS surfaces are the same as for NURBS curves. However, their layout is quite constraining. The concept of “segment” disappears, replaced by “rows” and the overall “grid”.

A “row” is a set of control points forming one “line” in one interpolation direction (a bit similar to edge loops for meshes). So you have “U-rows” and “V-rows” in a NURBS surface. The key point is that all rows of a given type (U or V) have the same number of control points. Each control point belongs to exactly one U-row and one V-row.

All this forms a “grid”, or “cage”, the shape of which controls the shape of the NURBS surface. A bit like a lattice…

This is very important to grasp: you cannot add a single control point to a NURBS surface; you have to add a whole U- or V-row at once (in practice, you will usually use the Extrude tool, or perhaps the Duplicate one, to add those…), containing exactly the same number of points as the others. This also means that you will only be able to “merge” different pieces of surfaces if at least one of their rows match together.

You can adjust the resolution separately for both preview and render, to not slow things down in the viewport, but still get good render results.

Like curves, surfaces can be closed (cyclical) or open, independently in both directions, allowing you to easily create a tube, donut or sphere shape, and they can be drawn as “solids” in Edit mode. This makes working with surfaces quite easy.

Just like with NURBS curves, NURBS surfaces have two knot vectors, one for each U and V axis. Here again, they can be one of Uniform, Endpoint, or Bezier, with the same properties as for curves. And as with curves, only open surfaces (in the relevant direction) are affected by this setting… 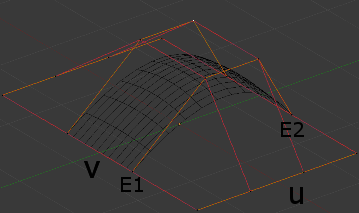 To cause the surface to extend to all edges you would set the V’s axis to Endpoint as well.

For illustration purposes, in both (Order 4 surface) and (Order 2 surface), the knot vectors were set to Endpoint, causing the surface to extend to all edges.

You can set independently the order for each interpolation axis, and like curves, it cannot be lower than 2, and higher than 6 or the number of control points on the relevant axis. 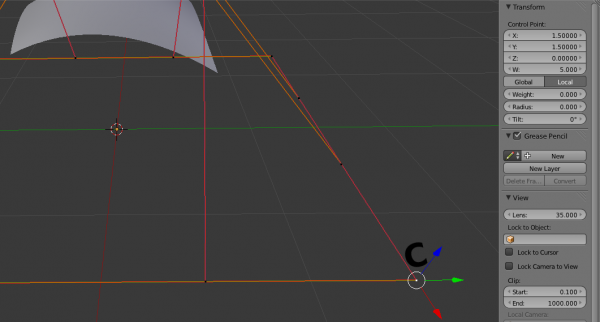 Guess what? Yes, it works exactly like NURBS Curves! Weight specifies how much each control point “pulls” on the curve.

In (Surface Weight 5), a single control point, labeled “C”, has had its Weight set to 5.0 while all others are at their default of 1.0. As you can see, that control point pulls the surface towards it.

If all the control points have the same Weight then each effectively cancels each other out. It is the difference in the weights that cause the surface to move towards or away from a control point.

The Weight of any particular control point is visible in the Transform Properties panel (N), in the W field (and not the Weight field…). 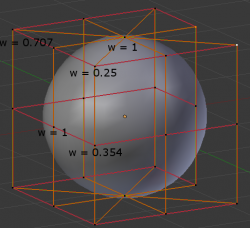 NURBS can create pure shapes such as circles, cylinders, and spheres (note that a Bézier circle is not a pure circle). To create pure circles, globes, or cylinders, you must set to specific values the weights of the control points – some of which are provided as presets in the Curve Tools panel (lower right corner). This is not intuitive, and you should read more on NURBS before trying this.

There are also two preset NURBS surface curves (with only one control point on each V-row): NURBS Curve and NURBS Circle.

Note how a circle NURBS surface is never filled, unlike its “real” curve counterpart…