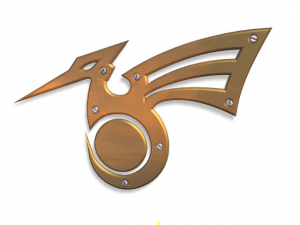 Bird logo made from Bezier curves.

The main advantage to using curves instead of polygonal meshes is that curves are defined by less data and so can produce excellent results using less memory and storage space at modeling time. However, this procedural approach to surfaces can increase demands at render time.

Certain modeling techniques, such as extruding a profile along a path, are possible only using curves. On the other hand, when using curves, vertex-level control is more difficult and if fine control is necessary, mesh editing may be a better modeling option.

Bezier curves are the most commonly used curves for designing letters or logos. They are also widely used in animation, both as paths for objects to move along and as F-curves to change the properties of objects as a function of time.

Skinning: Making a surface with two or more curves »

The main elements used in editing Bezier Curves are the Control Points and Handles. A Segment (the actual Curve) is found between two Control Points. In the image below, the Control Points can be found in the middle of the pink line while the Handles comprise the extensions from the Control Point. By default the arrows on the Segment represents the direction and relative speed and direction of movement Objects will have when moving along the curve. This can be altered by defining a custom Speed Ipo.

A Bezier curve can be edited by moving the locations of the Control Points and Handles.

Note that while in Edit mode you cannot directly select a Segment. To do so, select all of the Control Points that make up the Segment you want to move.

There are four Bezier curve handle types. They can be accessed by pressing V and selecting from the list that appears, or by pressing the appropriate hotkey combination. Handles can be rotated, moved, scaled and shrunk/fattened like any vertex in a mesh.

Additionally, the VT shortcut can be used to toggle between Free and Aligned handle types.

Curve Properties can be set from the Object Data option in the Properties Header (shown below in blue).

2D and 3D Curves
By default, new curves are set to be 3D, which means that Control Points can be placed anywhere in 3D space. Curves can also be set to 2D which constrain the Control Points to the Curve's local XY axis.
Resolution
The resolution property defines the number of points that are computed between every pair of Control Points. Curves can be made more or less smooth by increasing and decreasing the resolution respectively. The Preview U setting determines the resolution in the 3D viewport while the Render U setting determines the Curve's render resolution. If Render U is set to zero (0), then the Preview U setting is used for both the 3D viewport and render resolution.

Curves with a resolution of 3 (left) and 12 (right).
Twisting
A 3D Curve has Control Points that are not located on the Curve's local XY plane. This gives the Curve a twist which can affect the Curve normals. You can alter how the twist of the Curve is calculated by choosing from Minimum, Tangent and Z-Up options from the drop-down menu.

Curves with a twist of minimum (left) and tangent (right).
Fill
Fill determines the way a Curve is displayed when it is Beveled (see below for details on Beveling). When set to Half (the default) the Curve is displayed as half a cylinder. The Fill Deformed option allows you to indicate whether the Curve should be filled before or after (default) applying any Shape Keys or Modifiers.

Curves with a fill of half (left) and full (right).
Path/Curve-Deform
These options are primarily utilized when using a Curve as a Path or when using the Curve Deform property. The Radius, Stretch and Bounds Clamp options control how Objects use the Curve and are dealt with in more detail in the appropriate links below.

By default, text Objects are treated as curves. The Offset option will alter the space between letters.

Will extrude the curve along both the positive and negative local Z axes.

Changes the size of the bevel

Alters the smoothness of the bevel 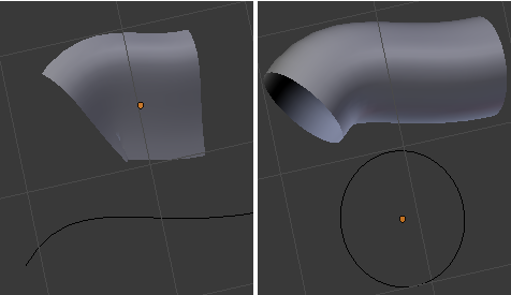 A Curve with the Bevel Object as a Bezier Curve (left) and as a Bezier Circle (right).
Fill Caps
Seals the ends of a beveled Curve.
Map Taper
For Curves using a Taper Object and with modifications to the Start/End Bevel Factor the Map Taper option will apply the taper to the beveled part of the Curve (not the whole Curve).

The Path Animation settings can be used to determine how Objects move along a certain path. See the link below for further information.

Read more about utilizing Curves for paths during animation »

Cyclic
Closes the Curve.
Resolution
Alters the smoothness of of each segment by changing the number of subdivisions.
Interpolation
Tilt

Alters how the tilt of a segment is calculated.

Alters how the radius of a Beveled Curve is calculated. The effects are easier to see after Shrinking/Fattening a control point AltS.

Smooths the normals of the Curve

One of the major differences between Bezier Objects and NURBS Objects is that Bezier Curves are approximations. For example, a Bezier circle is an approximation of a circle, whereas a NURBS circle is an exact circle. NURBS theory can be a very complicated topic. For an introduction, please consult the Wikipedia page. In practice, many of the Bezier curve operations discussed above apply to NURBS curves in the same manner. The following text will concentrate only on those aspects that are unique to NURBS curves.

A NURBS Curve is edited by moving the location of the Control Points. 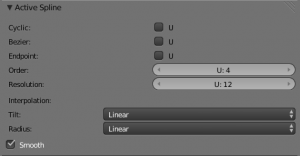 One of the characteristics of a NURBS object is the knot vector. This is a sequence of numbers used to determine the influence of the control points on the curve. While you cannot edit the knot vectors directly, you can influence them through the Endpoint and Bezier options in the Active Spline panel. Note that the Endpoint and Bezier settings only apply to open NURBS curves.

A NURBS curve with Cyclic applied.
Bezier
Makes the NURBS curve act like a Bezier curve.
Endpoint
Makes the curve contact the end control points. Cyclic must be disabled for this option to work.

As mentioned above, Curves are often used as paths. Any curve can be used as a Path if the Path Animation option is selected.

The Path option available from the Add Curve menu is identical to a 3D NURBS curve, except that you do not have access to the Active Spline panel.